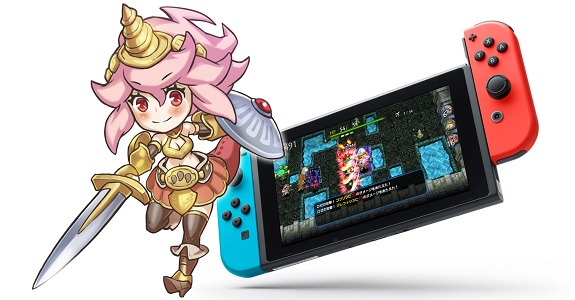 Last year, Toydea released Dragon Fang on Nintendo 3DS in Japan: a port of the game originally released on smart devices. And today, the company announced a brand new game called Dragon Fang Z: Ryuusha Rosée to Yadorigi no Meikyuu (lit. Dragon Fang Z: Dragon Rosée and the Labyrinth of the Tree of Life), which will be released on the Nintendo Switch this Fall. It will be playable at the Tokyo Game Show, this week.

Developed specifically for consoles, Dragon Fang Z is a rogue-like with randomly generated dungeons, and items/level not carrying over when you die. It features no less than 200 monsters, and you can actually use their abilities once you have defeated them. The battle system allows you to attack on three squares (instead of the just one in front of you), though that’s not something available to you from the beginning.

The developers are aiming for a worldwide release, as the game will be playable in several languages (besides Japanese). Dragon Fang Z will also feature voice acting.

Dragon Fang Z (Switch – eShop) comes out this Fall in Japan. The Upcoming Games page has been updated!