It has been announced that the Nintendo Switch version of 80’s Overdrive will be released on May 7th in Europe and North America. Here’s a trailer:

80’s OVERDRIVE is a 2D pixelart racing game, designed to take you back in time to when 8 and 16 bit consoles and arcade games ruled the world. Compete against opponents in career mode to unlock new races, buy new cars and upgrade them with state-of-the-art technologies! Try your skill in time attack mode and see how far you can get in this race against the clock! Create your own tracks with built-in track generator and easily share them with your friends!

80’s Overdrive (Switch – eShop) comes out on May 7th in Europe and North America. The Upcoming Games page has been updated!

Beautiful Glitch and Those Awesome Guys have announced that they are bringing Monster Prom to the Nintendo Switch, with Monster Prom: XXL (a content complete version of the game). This version includes the Second Term DLC, but also all the seasonal content released since launch. It’s now available for pre-purchase on the Nintendo eShop for $15.99, ahead of the May 21st release.

Monster Prom: XXL (Switch – eShop) comes out on May 21st in Europe and North America. The Upcoming Games page has been updated!

The latest DevBlog post for Moving Out is now live, and this one is about the Dual Mover Mode and the Day 1 Update. Click here to check it out!

Nacon have announced that several players for Tennis World Tour will be available as free downloads from May 4th: Denis Shapovalov, Alex de Minaur, and Caroline Garcia. 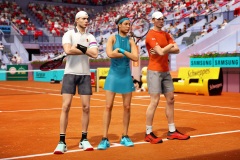