Want to help charity simply by playing Minecraft? Sure, no problem!

Microsoft teamed up with Jigarbov Productions in order to offer a new map and skin pack to all players: The Travelling Trader. This map is available for free from the Minecraft Market place right now, and if it ends up downloaded 100 000 times, Mojang / Microsoft will make an additional donation to charity: water of $90 000 (on top of the $10 000 one made earlier this year)!

Interested in a physical copy of Panty Party? Cosen have announced that the game will be available for pre-order on Play-Asia starting on May 2nd! It will have two editions: 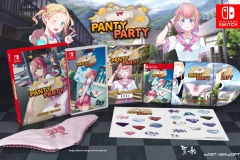 Today, the latest DevBlog update for Decay of Logos went live, and once again, it doesn’t have anything really new… click here to check it out for yourself! That being said, it does have a brand new screenshot: