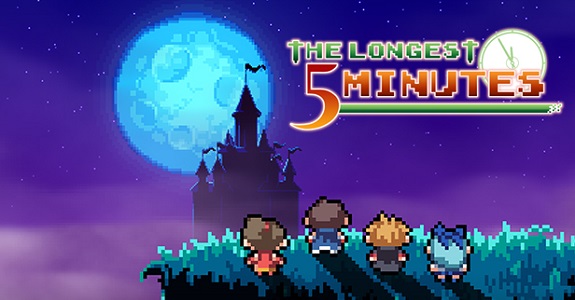 Earlier this week, NIS America announced that The Longest Five Minutes would be released on February 13th in North America, and February 16th. The Upcoming Games page has been updated as a result.

Also, the company revealed the latest trailer for the game, detailing the gameplay systems:

The Longest Five Minutes (Switch) comes out on February 13th in North America, and February 16th in Europe.

Earlier this week, the latest Kickstarter update for Bloodstained: Ritual of the Night went live. This one is about fashion, and you read it over at the Kickstarter page.

Here’s the video they shared:

Bloodstained: Ritual of the Night (Switch) comes out next year, but does not have a release date yet.

A few days ago, Atlus announced that Radiant Historia: Perfect Chronology would be released on February 13th in North America, with Europe getting it 3 days later, on February 16th. The game will cost 39.99€ / $39.99, with first-print copies coming with an exclusive artbook and a decal set. In Europe, only the artbook will be available, tucked inside the game case.

A few weeks ago, Atlus announced that The Alliance Alive would also get a Launch Edition, just like pretty much all their other releases at retail. This Launch Edition will include the following:

The Alliance Alive (3DS) comes out in Early 2018 in Europe and North America.

Yesterday, Nippon Ichi Software announced that Anata no Shikihime Kyouikutan was delayed to March 8th in Japan, instead of January 25th as announced initially. Officially, this delay is only for quality purposes, but one would be tempted to assume a certain Monster game is the reason behind the move to March…

Also, here’s plenty of screenshots and artworks for the game, as well as the debut trailer:

And here’s some screenshots and artworks:

World End Syndrome (Switch) comes out next year in Japan.

Here’s the debut trailer and various screenshots/artworks for the game:

And here’s a livestream recording, with some gameplay footage:

Gal Gun 2 (Switch) comes out on March 15th in Japan, and in Spring in Europe and North America.

A few weeks ago, Level-5 announced that Yo-kai Wach Busters 2 was delayed to December 16th. It was originally supposed to be released on December 7th. Officially, this delay is, once again, for quality purposes, but it’s likely Level-5 realised that a simultaneous release with the latest movie was a better idea.

Here’s some more screenshots and artworks for Yo-kai Watch Busters 2:

Here’s the latest episode of Nintendo Minute, which is not about a particular game once again:

Hi, the holidays are upon us! Today we share with you a bunch of really cool holiday themed Nintendo goodies to help you get into the spirit. Also, we both started playing Animal Crossing: Pocket Camp so for the next few videos, we’ll be sharing updates from our campsites with you. As always, we hope you enjoyed this video. Thanks so much for watching and we’ll see you next week!

Here’s the latest Nintendo Sneak Peek video, which is about the Nintendo New York store!