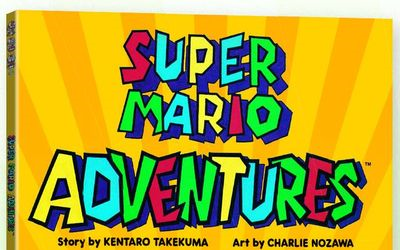 Between 1992 and 1993, Nintendo Power ran some Mario comics, called Super Mario Adventure. The story was written by Kentaro Takekuma, and the Art was by Charlie Nozawa. Unfortunately, trying to buy a copy of the collection is pretty much impossible, unless you’re willing to pay a lot… to get a used copy.

But good news: the collection is getting a reprint later this year, in North America (on October 12th). The price is pretty nice too: only $14.99!

Super Mario Adventures, inspired by the bestselling Super Mario video game franchise, is a collection of comics that originally ran in Nintendo Power magazine in 1992-93. The peril-plagued Princess Toadstool is kidnapped by the diabolical deadbeat Bowser but super plumbers Mario and Luigi hatch a plan with their new friend Yoshi to rescue her. Are the Super Mario Bros’ plans a pipe dream? Can they stop the Koopa King before he forces the Princess to be his bride?! Long out of print, this stunning, full-color graphic novel is now available once again!

And here’s the cover:

Our Upcoming Releases page was updated!

Source: Things From Another World

Are you a fan of FAST Racing Neo? Would you like to ask a question to the developers? If yes, click here and write down your question in the comments (before August 10th): Martin Sauter from ShinenGames may answer it in a video uploaded shortly after gamescom!

Yoshifumi Hashimoto is someone fans of the Story of Seasons and Rune Factory should know pretty well… he’s the producer of both! If you’ve ever wondered what his favorite pastime is? (Un)surprisingly, the answer is… farming!

I usually do it in Japan, but have tried in America, too. Unfortunately, American tractors are too big and you need a special license, so they wouldn’t let me drive one here.

He prefers farming around Kyoto, as opposed to the northern region of Japan where the weather is just too cold. It looks like he also loves animal, and frequent goes to the zoo and the local aquarium using annual passes.

Yoshifumi Hashimoto doesn’t have his own little garden where he currently lives, but back when he was a child, his grandparents had a little bit of land. It looks like this was what inspired some of the earlier Story of Seasons / Harvest Moon games!

Here’s the recording of the Culdcept Revolt segment from last week’s episode of Denjin Getcha: