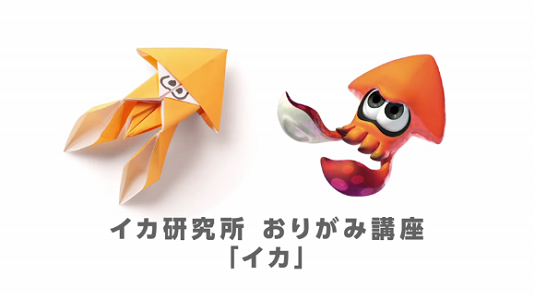 Today’s Daily and Nintendo Briefs: a video to learn how to make an origami Inkling (Splatoon), but also…

Origami is the art of paper folding, and while it originated from Japan, it’s become a popular practice all around the world. Today, the official Twitter account for Splatoon in Japan shared a pretty interesting video, that shows how to make an Inkling with nothing but paper. It’s only available in Japanese, but you should have no trouble following the instructions:

In Japan, Dragon Quest is one of the most popular video games series, and just like Super Mario, it’s more than just a video game series. Players from various generations have played at least one Dragon Quest, which is why the celebrations for the 30th Anniversary have had some semblance of national celebration.

If you want a proof of that, here’s a video from Gydo City, in Saitama:

And here’s pictures of giant slime made of hay:

Thanks gate stormer for the heads up!

Here’s the Wii U gameplay trailer for the Fantastic Beasts story pack for LEGO Dimensions:

Getting hold of a Nintendo Entertainment System: NES Classic Edition in North America can be quite… challenging. Mega64 didn’t need anything more to create a video on the matter, with a rather… unexpected ending!

Yesterday, YouTube revealed its  Top 10 most viewed game trailers for 2016, for games releasing in 2016 (though releasing next year are not counted, for example). And on Nintendo platforms, there’s only one trailer: the one for Pokémon Sun and Moon (Starter Pokémon revealed, with 10.8 million views).

Here’s another video for the Japanese tour of Capcom LIVE!:

Today, V-Jump magazine uploaded a video on their YouTube, in order to showcase the goodies that will be available on Capcom’s booth during the Jump Festa (December 17th and 18th):