We added the Dai Gyakuten Saiban: Naruhodou Ryuunosuke no Bouken segments from Capcom TV #24, but details about a special episode entirely dedicated to the game. You will find all that below, just after the break! 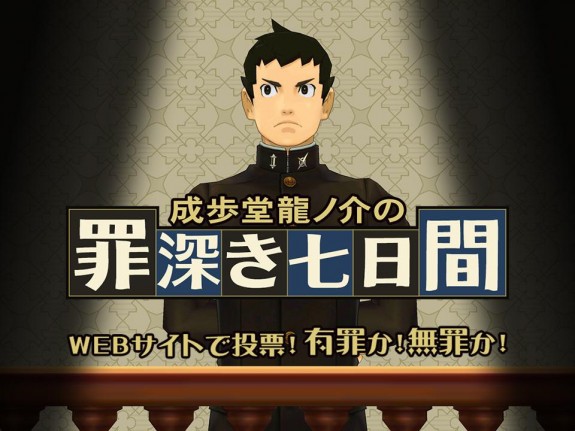 With exactly one week to go until release, Capcom launched the official Dai Gyakuten Saiban: Naruhodou Ryuunosuke no Bouken countdown. Of course, it’s not a simple clock ticking down until the game’s release, it’s something much more elaborate and amusing called “Naruhodou Ryuunosuke’s Crime-Filled Week”.

Every day until the game’s release, Capcom will upload a special video in which Naruhodou Ryuunosuke no Bouken is on trial for a crime he’s (supposedly) guilty of. Then, fans will have to go on the official website in order to vote: is he Guilty, or Innocent? Apparently, a simple vote is only 1 point… but if you do so via Twitter, it counts for 100!

Today, Naruhodou Ryuunosuke’s crime is to have spoiled Sherlock Holmes’ presence in the game… but is that really a spoiler in the first place? It’s up to you to decide!

Apparently Shu Takumi tweeted about this before the official website was updated… oops! It actually reminded him of another mistake he made one day, when he was new at Capcom. He was chatting with Hideki Kamiya when he spoiled a movie for him by mistake: Kamiya then refused to talk to him for a while!

And another day, he was cleaning the office when he suddenly sneezed right at Hideki Kamiya’s face… as you can imagine, he really didn’t take it well, and refused to talk to him for a month after that.

This morning, Capcom also revealed the latest batch of screenshots and artworks for Dai Gyakuten Saiban: Naruhodou Ryuunosuke no Bouken. They focus on Tobias Gregson (a detective from Scotland yard), but they also show Sherlock Holmes and Iris Watson’s home, as well as the famous detective in his everyday clothes.

Here’s the new screenshots and artworks for the game:

Today, Capcom announced that there would be a special episode of Capcom TV entirely dedicated to Dai Gyakuten Saiban: Naruhodou Ryuunosuke no Bouken on Saturday, July 11th. It will be streamed live on Twitch, NicoNico and YouTube at: