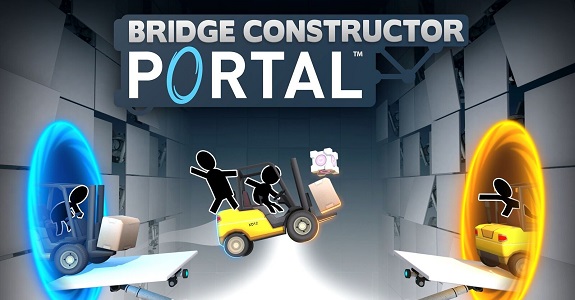 The game fully embrace the Portal universe, with various elements from the first two games directly integrated into the gameplay: the portals (obviously!), but also the talkative turrets, the Thermal Discouragement Beams, Hard Light Bridges, the Propulsion and Repulsion Gels, and yes, even the Companion Cubes!

Of course, you will have to work under the watchful eye of GLaDOS, who is bound to have lots of encouraging words for you (or not).

Bridge Constructor Portal will blend the laws of structural engineering and technology straight from Aperture Laboratories into an exciting new game experience, all under the demanding gaze of GLaDOS.

Here’s the debut trailer for Bridge Constructor Portal, which does not feature a second of gameplay (unfortunately):

Thankfully, we do have a couple of actual in-game screenshots for the game, that shows some of the Portal elements listed above:

Bridge Constructor Portal (Switch – eShop) will be released in Early 2018 in Europe and North America. The Upcoming Games page has been updated!