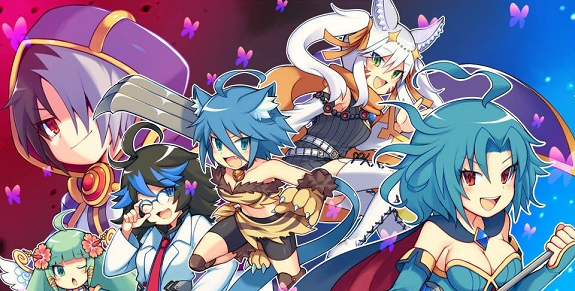 Yesterday, INSIDE SYSTEM shared a trailer and some new details about Brave Dungeon, their upcoming dungeon-RPG from the Legend of Dark Witch series. The new details are about the gameplay systems and various other tidibts.

Let’s start with what the game is all about: dungeon exploration. The main reason you’re going in those dungeons is to find some legendary magic item located in God’s Hill (at least, that’s what the main character is after). From the beginning of the game, you can chose to go exploring in a party of 3 (with two teammates), and you have access to all dungeons.

Naturally, each character has its specialty: some are focused attack, while others are focused on healing, dealing buffs/debuffs, etc.. And while you have access to all dungeons from the beginning, that doesn’t mean some are not more dangerous than others. Also, the materials available inside are not always the same, so you need to plan things accordingly before heading inside one.

There’s a total of 5 dungeons:

Of course, Brave Dungeon isn’t all about dungeons: there’s also a town called Newport, where you can find an inn, various shops, and more. If you’re in need of information, or some teammates to explore the dungeons with, Newport is where you want to go.

At the beginning of the game, you’re on your own, but you can head to the Inn in order to talk to the characters there, and recruit them. You can have only up to three characters in your party, but you can switch at any time at the Inn.

While inside a dungeon, defeating enemies net your some precious materials. You can bring those back to the Inn in order to “purchase” various upgrades, or exhange them for a currency called Trace (used to buy items). You can also trade them for some Gohan Coins. There are also quests you can complete by getting the right materials from the dungeons.

Next, we have accessories: you can equip those on your characters in order to give them special bonuses during battle. There’s two ways to get some:

To have your character level up, you need to:

Every time a character levels up, they can change their class: this allows them to learn new magic. It looks like you can chose up to two different classes, and level them up.

Here’s the trailer for Brave Dungeon, along with some new screenshots: