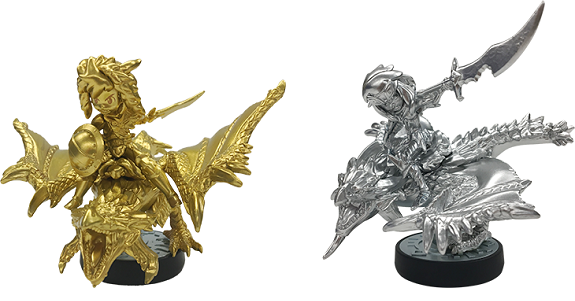 Ever since Nintendo first launched amiibo, alongside Super Smash Bros. for Wii U back in 2014, there has been dozens and dozens of figures. Some of them are obviously rarer than others, but even the rarest of them all is nothing compared to the two amiibo revealed by Capcom last week. How rare, you ask? Well… only an extremely limited number of figures will ever be made.

Here’s a video showcasing both figures:

Naturally, those two amiibo are “just” a Gold and Silver version of the already existing figures, not “new” figures per se (which means they should function the same way their regular counterpart do in games… unless Capcom adds a little extra via a Software update?).

Since they are prizes for a tournament, the two amiibo will most definitely not be available at retail sometime after the tournament (that would kind of defeat the purpose of having them as special prizes in the first place!).

Those two amiibo are not the first Gold / Silver figures: we’ve already had Gold Mario and Silver Mario, not to mention the exclusive Gold Mega Man (only in North America). But those two are definitely the rarest, by a long shot!