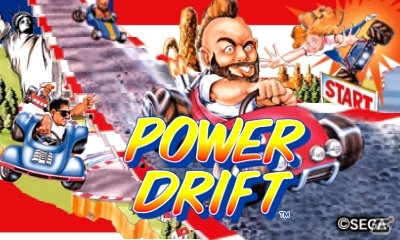 On Friday, SEGA opened the official website for 3D Power Drift (included in the SEGA 3D Classics Archives 2 collection, announced a few weeks ago). This allows us to get some details about the game, and more precisely the changes and new features of this SEGA 3D Classics title.

First, SEGA reveals that when the first SEGA 3D Classics Archives collection came out (last year), they put out a questionnaire. It turns out that Power Drift was the most requested by players, who really wanted the game to get a 3D Classics version.

The developers added the usual features of a SEGA 3D Classics:

But that’s not all: the developers also added some rather neat features, such as a Replay (allowing you to check out only one course). For players who have a hard time changing gears, an automatic mode was added.

But that’s not all: there’s now 2 operation types for your car:

Next, we have the various screen options:

And for sound/music, we have:

SEGA also gives some details about the original game: there’s 25 stages in total (not counting the extra stages), and one course consists of 5 tracks. Each one has 4 laps, and in order to get to the next one, you need to place at least 3rd (of course, you can use Continues to keep playing). If you place first at all 5 tracks of a stage, you will get to play a special track.

Here’s the controls (which can be customised at will):

Finally, some good news for fans looking forward to import the collection: 3D Power Drift will also be playable in English, not just Japanese!

Source: SEGA / Inside-Game
Thanks Ash for the help with translation!