We just added the opening video: you will find it below!

Harvest December is a series of short visual novels for the Nintendo 3DS, originally released in 13 episodes in Japan. A few months ago, Circle Entertainement revealed they were going to bring the game to Europe and North America, but didn’t give any release date. Good news for players looking for a visual novel to play on their Nintendo 3DS: the wait is almost over! 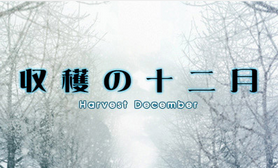 Last month, Circle Entertainment revealed that the game had passed lotcheck at Nintendo of America, and that it had already been submitted to Nintendo of Europe. It looks like everything went well: today, the company confirmed that the game would be released this year in Europe and North America… on December 10th to be more precise!

Unlike Japan, where every episode was sold separately,  Petit Novel series Harvest December will include all 13 episodes from the get go in Europe and North America. It will cost 11.99€ (the North American price remains to be confirmed). Unfortunately, Circle Entertainment confirmed the game would only be playable in English (adding other languages would most likely have been too expensive for a Nintendo eShop title).