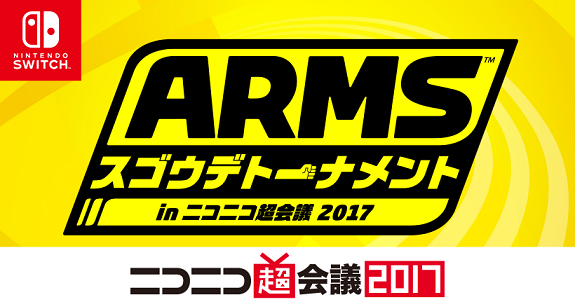 Nico Nico Choukaigi is a major event held every year by Nico Nico, the popular video sharing / streaming website. This year, it takes place on April 29th and April 30th, and just like past years, Nintendo will be attending. ARMS is one of the games that will be playable at the event, with both a demo and a tournament.

A total of 256 persons will be able to take part in that tournament (2 x 64 people for each day), with both Morning and Afternoon sessions. Naturally, places for the tournament are distributed in a first-come first-served basis, so those who want to participate will have to come early.

Everyone who participate will receive an exclusive ARMS sticker, with the winner of each session getting a bandana. Finally, the overall winner will get a t-shirt.

The tournament will be streamed live on NicoNico (hopefully with official recordings on YouTube afterwards):

What’s more there will also be exhibition matches with several professional gamers:

ARMS (Switch) will be released on Juny 16th, worldwide.