Just like Kirby’s Epic Yarn, Yoshi’s Woolly World is developed by Good-Feel.They both sport the same artstyle, that makes the game world looks as if it’s entirely made of wool. That being said, it’s not the case for some elements of the levels or stronger enemies (like bosses). For those, you first need to bound them in wool and then jump on them in order to deal some damage.

The other enemies (almost entirely made of wool) are the usual creatures from the Yoshi series, such as Shy Guys, Nipper Plants, Lakitus, or Gustys. With those, you can simply catch them with Yoshi’s tongue and unravel them: this is actually the main method of dispatching enemies in the game. This allows you to turn them into balls of wools, which are pretty much this game’s equivalent of the Yoshi eggs.

Then, you can use the balls of wool to bind enemies made of other materials, but also to create various things such as warp pipes, boxes or even platforms. They are pretty much mandatory to discover all the secrets hidden in the various levels of the game. And just like in Kirby’s Epic Yarn, you can find some secret areas by unravelling loose threads of wool. 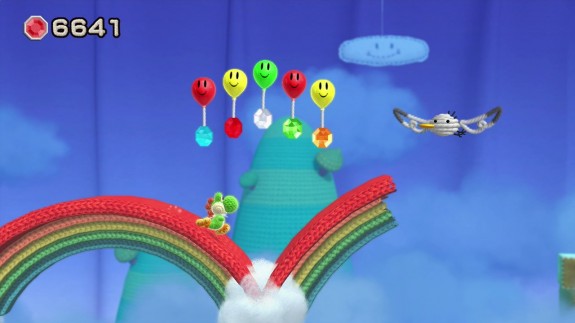 As you can expect, the levels of Yoshi’s Woolly World are filled with various secrets and collectables: the traditional flowers (which allow you to get 100% completion and access a mini-game to win more beads), beads (which replace the coins, and allow you to buy special badges to help you in the levels), Stamp Patches (that you can use to unlock Miiverse stamps), and Wonder Wools.

Wonder Wools are a bit special: there’s 5 of them in each level, and if you get them all, you can unlock new designs for Yoshi (that you can then use in any level): Flower Yoshi, Circus Yoshi, and even Shy Guy Yoshi.

Good news if you don’t like Baby Mario’s ear-piercing screams: he’s nowhere to be seen in Yoshi’s Woolly World. Instead, Yoshi has a rather standard health bar, and to replenish it you need to collect hearts (that look like the collectable hearts from previous Yoshi games).

During the game, Yoshi will be able to transform into various things: an umbrella, a mole, a giant Yoshi, and even a motorbike. Those transformations happens several times in each world:  you have to reach the level within the time limit, and if you fail, you have to restart.

As for Mellow Mode (revealed during the April 1st/2nd Nintendo Direct), it allows you to control a special winged Yoshi who can flutter indefinitely. That being said, you’re not invicible in this mode: you can still take damage and die in the levels. Finally, Yoshi’s Wooly World is indeed playable in co-op (2 players), and you can even use your partner as a wool ball if you even run out.

Here’s some new screenshots for the game:

Yoshi’s Woolly World (Wii U) comes out on June 26th in Europe, and later this year in Japan and North America.