As the Kickstarter campaign for Yooka-Laylee is still going on, Playtonic published an official interview of Chris Sutherland. He is presented as the “most senior and dexterous Yooka-Laylee team member”, and that’s no wonder… he has almost 30 years of experience under his belt.

This official interview covers various topics, starting with movement in a 3D game. Chris Sutherland explains that the most important thing is that the movements should feel fun… it’s as “simple” as that. This fun comes from a combination of how the characters move on ground / in the air / in water, and how those movements relate to the animations.

For Yooka-Laylee, he actually started with a cube. Why a cube? Well, he thought that if it was fun enough to move around a cube, he wouldn’t have to worry about a bat and a chameleon! During development, he paid particular attention to the balance between gameplay and animation, with gameplay always trumping animation. The moves have to look visually impressive, while feeling responsive at the same time.

Chris Sutherland also does some voice acting, and he admits that he found all the roles he got to perform fun. There’s an exception though: shouting. It may be fun at first, but you can’t really do it repeatedly… after all, shouting really is the bane of any voice actor (professional or not).

Laylee was the first one to get a voice, and the whole process went rather smoothly, fitting with what the team had in mind for this character. For Yooka, they wanted a voice that was really distinct from Laylee’s, so the team need a few iterations before they were completely satisfied.

You can read the full interview by heading to the official Playtonic website! 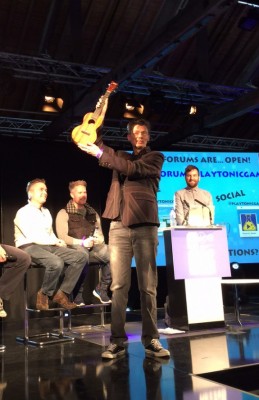 Yooka-Laylee will come out on Wii U.