This month, CoroCoro magazine has quite a few surprises in store, it seems! Yesterday, we learned that the mysterious new Pokémon spotted in the teaser trailer for the next movie would make an appaearance in The Strongest Mega Evolution IV. And today, a scan allows us to learn about a really surprising game for the Yo-kai Watch series.

There’s two things which are surprising about this game. The first one: it’s for the Wii U, making it the very first Yo-kai Watch title on the platform. The second one: it’s… a dance game! But not just any old dance game, it’s a special version of the well-known Just Dance series by Ubisoft. Unsurprisingly, it’s called Yo-kai Watch Dance: Just Dance Special Edition.

The scan doesn’t allow us to learn much about the game, except that it will (logically) require Wiimotes to be played. Quite obviously, there’s going to be various songs from the Yo-kai Watch series, including the famous Yo-kai Taisou Daiichi (which was used as the first ending for the anime series) and its 99 million views on YouTube.

Unfortunately, the scan has no details about the tracklist for this Yo-kai Watch Dance: Just Dance Special Edition game, which is bound to include tracks which are not from Yo-kai Watch proper (but which can be enjoyed by the usual Yo-kai Watch audience). As for the “dancers” in-game, they’re obviously the same as in the game / anime series (Keita, Fumi-chan, Kuma and Kanchi).

Here’s the first scan for the game: 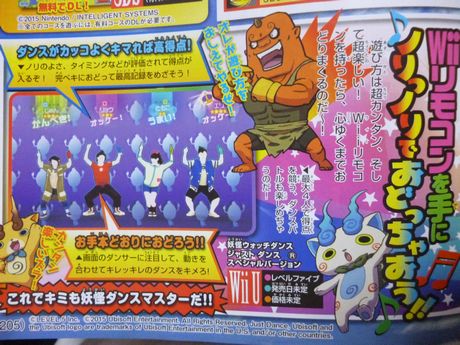 Unfortunately, the magazine gives no release date for Yo-kai Watch Dance: Just Dance Special Edition, which will most likely come out in time for the holidays.