This week’s update for the Xenoblade Chronicles X official website is quite meaty, and is focused on Dolls. There’s several videos, lots of screenshots, some artworks, some concept-arts and more!

Dolls are basically mechas that you can use to explore Planet Mira and fight against monsters / agressive alien races. They can do lots of different things, and they’re pretty much required to explore Planet Mira from top to bottom. And once the Flight Pack has been developed, you can even use them to fly in the air. But before you can use one of those precious mechas, you will need to pass the “Doll Licence Certification Exam”.

– Light: low HP, but high Accuracy and Evasion rates. Excellent mobility during battles. Low fuel capacity, but actually uses less fuel (which allows you to fly further than other types of Dolls). Rather affordable, making them great for beginners. 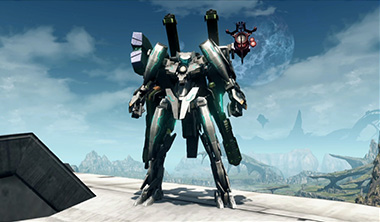 – Medium: very balanced and easy to handle. They got excellent armor, making them hard to destroy. More expensive, but great for pilots with some battle experience. 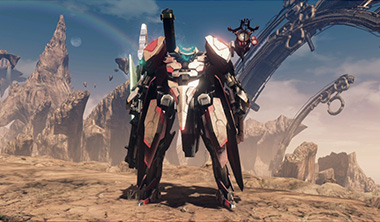 – Heavy: lots of HP and Defense. High fuel capacity, allowing the frequent use of high-powered weaponry. They’re quite heavy and therefore slow, and you can’t fly as far as with other types of Dolls. There’s extremely expensive, which is why they’re only recommended to veterans or “romantic” pilots. 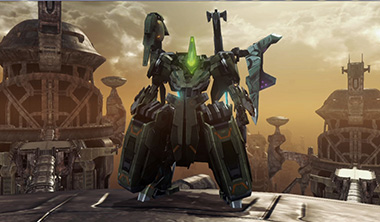 Here’s a video for Dolls:

During battles, Doll’s auto-attacks use the hand weapons (such as Rods, Swords, Assault Rifles, Shotguns, etc.), while Arts use weapons equipped to other parts of it. It’s possible to equip up to 8 different weapons, which are divided in 4 categories (with Left / Right slots):

The good thing about Dolls is that the battle system is quite similar to when you’re on foot. For example, you can use Overclock Gear while in a Doll, provided you’ve accumulated the usual 3000TP for that. When using OG, you don’t use any fuel at all, which is quite handy when you need to go berserk with your attacks.

Also, when you use Arts while on-board a Doll, you have a fixed chance of entering “Cockpit mode”: it allows you to use Arts continuously, without having to wait for them to reload.

Another interesting feature of Dolls: when an enemy is suffering from the Break status, you can catch it. This prevents it from moving for a few moments, but also increases damage of allies attacks on it (which will never miss).

Of course, you need fuel to fly with Dolls, and to use Arts. Refuel is automatic when you disembark, but the process is quite slow. Alternatively, you can head to New Los Angeles to refuel, but that’s actually quite costly… Finally: you can customise your Doll. To do so, simply head to the B.L.A.D.E. home base, and use the special console there. You can change the Doll’s name, its colours, its equipment, and more.

Here’s the Dolls used by the development team:

Next, various models of Dolls are showcased:

– Formula series: the standard model, with a Light frame base. It’s actually the basis of all other Dolls, with high speed in battle and a two-wheeled vehicle transformation. A low-priced, entry-level Doll. Comes equipped with the JINRAI gear.

– Urban series: a model for urban deployment, with a Light frame base. It has high durability and melee capabilities, thanks to its extra armor. Unfortunately, this comes at a cost: it loses some maneuverability and operation time. However, its maneuverability in vehicle mode is excellent. Comes equipped with the OBORO gear.

– Wels series: thanks to its custom frame, it boasts medium-level power, even though it uses a Light base. It is described as rather peculiar but very efficient model. The standard version comes with the G-Buster (mounted on the shoulder), developed for this very model of Doll. Comes equipped with the HAGANE gear.

– Lailah series: another custom model, with a Medium frame base. It’s heavier than Light-type Dolls, but still has high mobility and high power output. The standard version comes with the F-Rifle (mounted on the shoulder), developed for this very model of Doll. Comes equipped with the NAGI gear.

– Inferno series: another custom model with a Medium frame base. It’s mass produced, and used as a standard-issue model. The reason why is because it has high durability and is well-balanced for all fighting ranges. The standard version comes with the B-Gating (mounted on the shoulder), developed for this very model of Doll. Comes equipped with the HIBANA gear.

– Mastema series: a model using a Heavy frame base, and with multiple legs. It’s excellent for long-range fighting, but this comes at the cost of maneuverability (it is quite heavy). The standard version comes with the M-Sniper (mounted on the shoulder), developed for this very model of Doll. It’s quite hard to control when in vehicle mode. Comes equipped with the GEKITU gear.

– Amdusias series: a treaded model using a Heavy frame base. Its price is absolutely ludicrous, but there’s a reason for that: it boasts the highest melee power and durability of all models of Dolls, as it was designed to be an exceptional close-range fighter. The standard version comes with the E-Scythe (mounted on the shoulder), developed for this very model of Doll. Comes equipped with the KURENAI gear.

Here’s some screenshots showing some exploration: