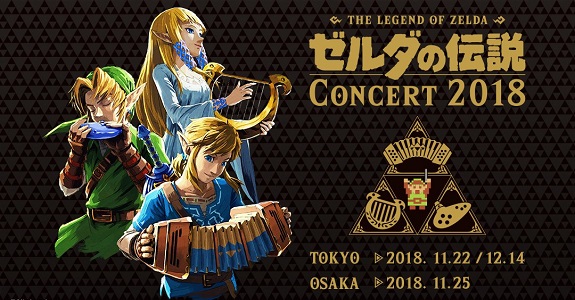 The Legend of Zelda Concert 2018 is the very first orchestral concert entirely dedicated to the Legend of Zelda series in about two years in Japan. There has already been several performances, last month in Osaka and Tokyo, with another one scheduled for December 14th (in Tokyo). This last performance will be livestreamed, but only to fans in Japan. Fortunately, Nippon Columbia has announced that an album featuring a recording of the concert will be released in March in Japan.

The Legend of Zelda Concert 2018 album will be released on March 6th. It will include 2CDs, most likely including the full recording of the concert (no missing tracks like the previous album, for the concert held in 2016). There will be two editions:

Unlike the DVD included in the previous album, the Blu-Ray that comes with the Limited Edition includes the recording of the actual concert (showing the musicians performing the music), not just the game footage shown on screen at the venue. Nippon Columbia specifies that the recording will be of the Tokyo performance on December 14th, and will most likely be the same as the livestream on NicoNico (albeit in much higher quality!). In other words: if you can’t watch the livestream, you will still be able to watch a proper recording (and legally, to boot)!