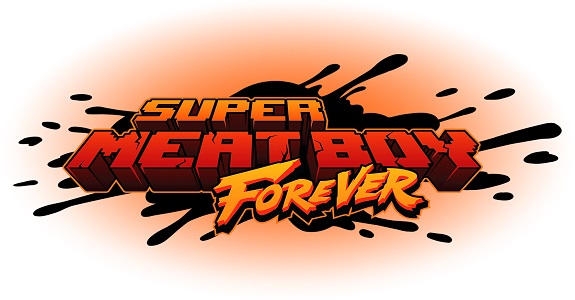 If it’s the first time you’re hearing about Super Meat Boy: Forever, here’s a trailer to get you up to speed:

In case you’re wondering: yes, this is Super Meat Boy 2, though it’s not called that way. In this game, Dr. Fetus is once again being a jerk, and kidnap Nugget (Meat Boy and Bandage Girl’s little baby). The pair then goes on a journey in order to rescue her.

What’s really interesting about this game is that it features dynamically constructed levels, with the construction based on difficulty. But that’s not the most interesting part: each time you beat a level, it reconstructs into a harder version of itself (up to a certain point).

Another change from Super Meat Boy is that Meat Boy and Bandage Girl have finally learned to defend themselves, and can now punch and kick enemies. That’s why there’s now two control buttons, allowing you to jump, attack, dive, and slide. Naturally, the levels were designed to use two buttons.

In Super Meat Boy Forever, Meat Boy and Bandage Girl never stop running, but that doesn’t mean you’re dealing with an auto-runner. They can also attack enemies, dash through the air, and more. The game also features tons of levels, bosses, secrets, and a great deal of fair difficulty. It’s basically a Super Meat Boy 2, except… it’s not called Super Meat Boy 2.

Oh, and if you’re worried about the “dynamically constructed” bit above, read the following:

“Procedurally generated” is an overused term that applies to a wide range of things. While the levels are randomly generated, they aren’t truly random and their creation is heavily based on criteria we’ve designed and tested. Each level consists of hundreds of carefully designed “chunks” that are placed together to create a level. Chunks are selected randomly from pools that are categorized by difficulty by us. Each time you beat a level, an increased difficulty criteria is used to generate the harder version of that level. Also, levels need to have a certain cadence to them so they don’t feel like just random stuff thrown at you. We’ve worked on a system that allows us to give a criteria of difficulty and pacing that makes the levels randomly, but still within the confines of what we want the levels to be presented as. Oh and also, it sounds way cooler than “procedurally generated”.

The story of this sequel finds Nugget, the adorable baby girl of Meat Boy and Bandage Girl, kidnapped by the evil Dr. Fetus. Players will take control of Meat Boy and Bandage Girl through six chapters filled with randomly constructed levels that increase in difficulty each time they are ranked up. Once a level is completed, players can continue playing harder versions until that level is mastered.

Super Meat Boy Forever (Switch – eShop) will be released next year… if everything goes well! The Upcoming Games page has been updated!