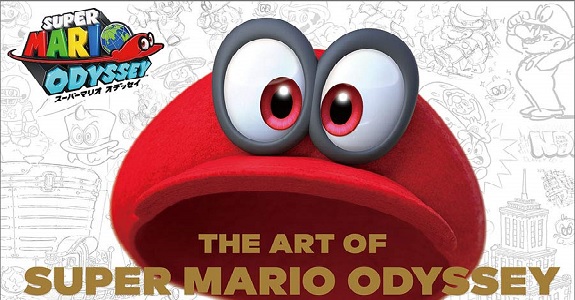 If you’re a really big fan of Super Mario Odyssey and/or its art design, here’s some good news for you: it’s been announced that the game is getting an artbook in Japan, called The Art of Super Mario Odyssey (courtesy of the Nintendo Dream magazine staff). This artbook will include no less than 1000 illustrations, pieces of concept-art, design documents, and more. Some of them will be revealed to the general public for the very first time! It will allow fans to get a look and understand better how the game and its world came to be!

Here’s what the cover of the artbook looks like:

The Art of Super Mario Odyssey will be released on September 28th in Japan, and costs 4 860 Yen. Right now, nothing has been announced regarding a possible English release, but since books based on Nintendo games frequently get a western release (generally via Dark Horse), it’s quite likely The Art of Super Mario Odyssey will also get one. Unfortunately, it’s also likely that fans will have to wait quite a white before being able to read it in English!

Speaking of concept art, the latest piece shared via the official Twitter account in Japan is for Spewart, one of the Broodals. When designing this character, particular attention was paid to the mouth, and more precisely its size and shape when launching attacks.

And speaking of Spewart, a new special outfit is now available in-game… the Spewart Hat and the Spewart Suit! You can get them from any good Crazy Cap Store, though only after clearing the main adventure.