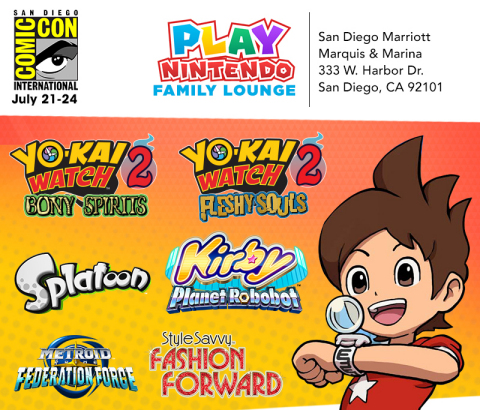 Next week, the San Diego Comic-Con 2016 will take place in San Diego, and as usual, Nintendo will be attending. The company will have several Wii U and Nintendo 3DS games playable on its booth, but also various activities.

This time around, the Play Nintendo tour will be integrated in the Play Nintendo Family Lounge, located on the first floor of the Marriott Marquis San Diego Marina (open to everyone, even those without a Comic-Con badge).

Splatoon will get its own set of activities:

Next, here’s the list of playable games on Nintendo’s booth:

The San Diego Comic-Con 2016 will take place from July 21st to July 24th in San Diego. The Nintendo booth is #235, and requires a badge. The Play Nintendo Family is located on the first floor of the Marriott Marquis San Diego Marina, and is open to everyone (even those without a Comic-Con badge).