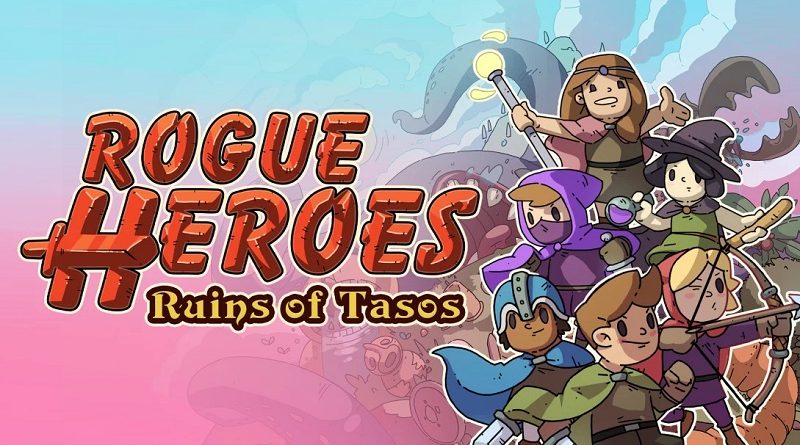 On this page, you will find all there is to know about the various Software updates for Rogue Heroes: Ruins of Tasos on Nintendo Switch (originally released on February 23rd 2021 in Europe, North America, and Japan)!

You’ve heard of pet the dog… but what if you’re the one who wants to be petted? The Druid class allows you to transform into 6 different forms!

Featuring new handmade dungeons, each of these have a new tileset, puzzle structure, enemies and bosses!

Skull Rock
Location: Overworld A18 (Far Southwest in Overworld)
Monster Level: 20A desert / beach themed dungeon accessed by completing the Rescue Hank sidequest and getting the crab key. Players will have to find pearls and slot them into pedestals matching the design on each pearl, to unlock the boss room near the entrance!
Mines
Location: Overworld S1(Far Northeast in Overworld)
Monster Level: 70A mining themed dungeon in the wooded granite hills area! A large three floor dungeon where players will have to activate statues on each floor to unlock the boss room at the bottom. This dungeon features puzzles involving filling and moving minecarts on moveable tracks with pressure plates to activate nearby elements.
Slalen Ruins
Location: Overworld T11 (Far East in the overworld half way between north and south)
Monster Level: 75A water themed dungeon accessed by the new Flipper equipment. Players will have to raise and lower the water level to access different parts of each room…
Catacombs – Infinite Combat Dungeon
A new infinite dungeon focused on combat has been added to the village! Fight through 26 room types randomly chosen for each floor – the difficulty with increase the further you venture, how long can you survive?

Enhance and add elements to your class at the Goddess Shrine Shop, or sell excess monster parts for gold at the Monster Shop! If you’ve got the itch for a little competition, stop by the Tavern!

How to download updates for Rogue Heroes: Ruins of Tasos for the Nintendo Switch?

To download the updates for Rogue Heroes: Ruins of Tasos, you have three options: