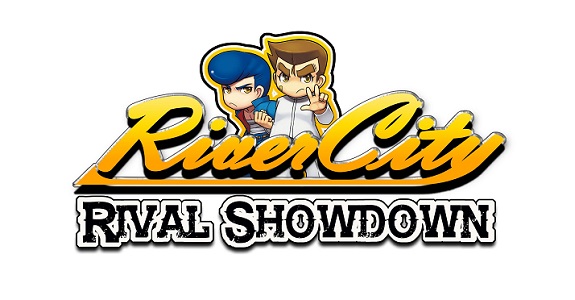 Back in May, Natsume announced they were bringing not one, but two more Kunio-kun games to Europe and North America (on Nintendo 3DS). The first one, River City: Knights of Justice, is already available as a Nintendo eShop exclusive. The second one, River City: Rival Showdown (released as Downtown Nekketsu Monogatari SP, will be released in November and is getting a retail release in North America.

That retail edition will include a limited edition keychain as a first-print bonus (though if River City: Tokyo Rumble is anything to go by, there will be several reprints of that “launch edition”), and will cost $29.99.

For those of you who didn’t follow our coverage of the Japanese version, this game is a remake of River City Ransom. It adds new story paths, additional endings, and a dynamic fighting system.

One night, Kunio is attacked by two mysterious individuals. On top of that, Riki’s girlfriend has disappeared, and it’s up to Kunio to find out the truth! Kunio has just 3 days to unravel the mystery, and he’ll need your help to take down all who stand in his way. Take on some familiar faces from the River City games and meet new ones in this fast-paced beat-’em-up RPG.

And here’s the key features:

River City: Rival Showdown (3DS) comes out in November in Europe and North America. The Upcoming Games page has been udpated with this new “date”.