During the January Nintendo Direct, Nintendo confirmed that Europe and North America would not only get Puzzle & Dragons: Super Mario Bros. Edition, but also Puzzle & Dragons Z (which has already sold over 1.5 million units in Japan). Even better: both games will be included in a bundle, which means two games for the price of one!

Just after the Nintendo Direct, a first (temporary) boxart for the bundle was shown, but today, Nintendo has finally revealed the final version. Unsurprisingly, there’s barely any differences between the two: the only exceptions are the “Provisional” text below the PEGI logo, and the Nintendo Network logo, which have been removed from the final version of the boxart. 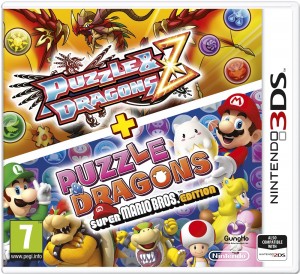