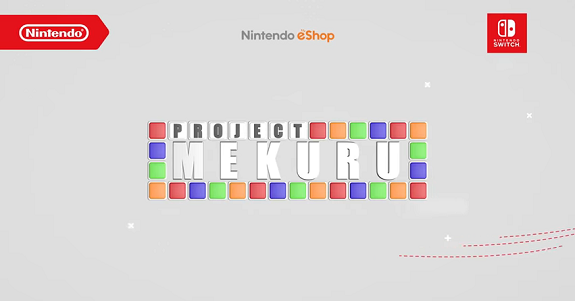 During today’s Nintendo Direct, Nintendo shared some more details about the mysterious Project Mekuru, a game that was stealth-revealed during the Nintendo Switch Presentation January 2017. It’s an action game where players compete by flipping panels (which is done by doing a ground pound).

When you flip a panel, the colour of that panel and those nearby switch to your colour… and opponents standing on them are sent flying. Sometimes, flipping panels reveal some items: you need to grab those before other players, in order to get various bonuses such as boost in movement speed, panel flipping power, and more.

Project Mekuru is a multiplayer-focused title, that can be played with up to 4 player via local multiplayer, but also online. Unfortunately, that’s all we know for now: Nintendo didn’t say anything about the game modes available, the types of items you could collect in the game, etc.. Hopefully, we will not have to wait too long before getting some more details about this rather promising multiplayer title!

However, we did get a release window: Summer, via the Nintendo eShop.

For some footage, you can check out the video from the Nintendo Direct presentation, from 4:32:

Some screenshots from Famitsu show they are various rules, including “Life Battle” (with the game letting you chose the duration of the match, and the number of lives).

Project Mekuru (Switch – eShop) will be released this Summer worldwide. The Upcoming Releases page has been updated!