The Pokémon Company have shared some more details about the home release for Pokémon Detective Pikachu in the United States. At retail, the following editions will be available: 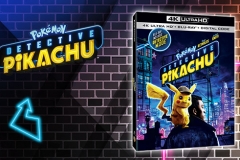 Here’s the various bonus features that come with the movie:

Finally, just like in the United Kingdom, the physical release of the movie will include a special promo card (no matter which edition you pick). Digitally, the movie will be available at the following: Amazon, FandangoNOW, AppleTV, PlayStation, Vudu, Xbox, and more.

Reminder: the home release of Pokémon Detective Pikachu is only July 23rd digitally, and August 6th at retail, in the United States.

At the end of the early screening of Mewtwo Strikes Back Evolution, at Anime Expo 2019, a teaser for the next Pokémon movie was shown. Unfortunately, it’s not clear when that teaser trailer will be uploaded on YouTube. Right now, we have very little details about the movie, and all we know is that it will use 2D animation (as opposed to 3D animation used in Mewtwo Strikes Back Evolution).

The movie will most definitely open on July 10th 2020 in Japan.

Here’s a few commercials for Mewtwo Strikes Back Evolution:

In order to celebrate the release of Mewtwo Strikes Back Evolution in Japan, on July 12th, Armored Mewtwo is set to appear in five-star raids from July 10th to July 31st. Also, Mewtwo items will be added to the Style Shop!

Nintendo have announced that Pokémon Sword and Shield will be playable at Hyper Japan Festival 2019, taking place from July 12th to July 14th at Olympia London, Kensington. It will be the same demo that has already been playable at various events (including E3 2019).