As announced last week right after the Nintendo 3DS Direct, new details about Pokémon Sun and Moon were revealed today. As usual, it’s via a new trailer that those details were revealed, and this time, there’s quite a lot to discover: new Pokémon, new Alolan variant, new characters, and much more!

Without further ado, here’s the new trailer for Pokémon Sun and Moon:

Here’s the Japanese version of the trailer, with even more footage… and a new bee-like Pokémon:

And here’s the second episode of the series of promotional videos: 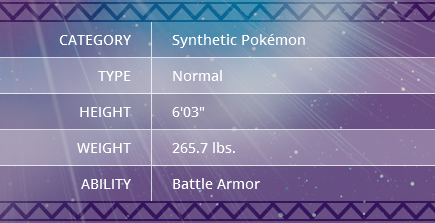 This Pokémon wearing a mask has been dubbed “Null,” meaning nothing.

The shapes of its front and hind legs are clearly different. The reason is that Type: Null was constructed to synthesize the strengths of various Pokémon, enabling it to adapt to any situation.

The mask fitted to Type: Null’s head is a piece of equipment designed to control its latent powers. It’s extremely heavy, so it also serves to hinder Type: Null’s agility.

To complete a certain mission, there was need of a Pokémon powerful enough to rival those Pokémon often spoken of in mythology. 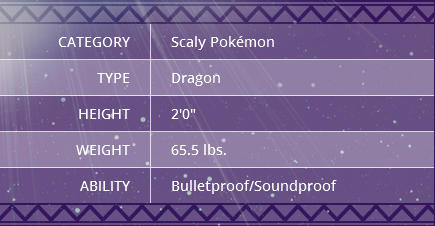 Jangmo-o has the pride of a warrior, although it remains humble about its capabilities. In its pursuit to become stronger, it never neglects its training.

Because Jangmo-o uses the scales on its head for both offense and defense, it never turns its back to its enemies. Many Trainers see this behavior and take it as proof that Jangmo-o is a valiant Pokémon.

Jangmo-o gather in harsh locales like canyons, where no other people or Pokémon are around, to live together as they train.

Here’s artworks for both Pokémon:

The trailer revealed a new Alolan Variant: Alolan Raticate, the evolution of the Alolan Rattata! 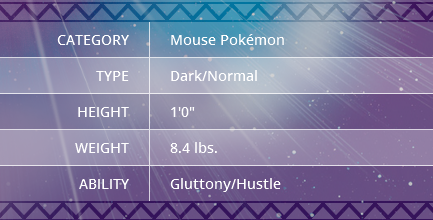 Alolan Rattata’s form changed as a result of their battle for territory with Yungoos.

Unlike ordinary Rattata, urban areas are Alolan Rattata’s main habitat. They are nocturnal and live in nests of several dozen. Alolan Raticate serve as their bosses.

As a countermeasure to the exploding Rattata population in the Alola region, Yungoos were imported and released. To better avoid Yungoos, Rattata changed their preferred environments and circadian rhythms. These adaptations to their new environment led to a changed form.

Alolan Rattata have an excellent capacity for sniffing out delicious fresh foods in Alola. They pay no attention to foods that aren’t fresh. 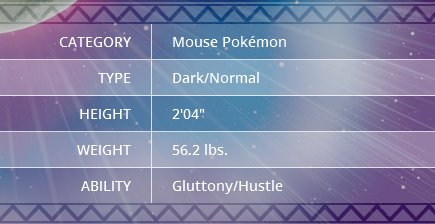 Because urban areas are their main habitat, their diet is higher in calories than ordinary Raticate. As a result, they have become hefty.

Alolan Raticate prefers to eat only fresh fruits and high-class ingredients. There are rumors that a certain top-notch restaurant takes advantage of Alolan Raticate’s taste buds by bringing it along when choosing ingredients to buy, and having it taste test new dishes.

Alolan Raticate continually stockpile huge amounts of food in their nests. They mostly prefer to send out Alolan Rattata to gather food while they themselves stay home in their nests and just eat.

Alolan Raticate is the Totem Pokémon of the trial that takes place in Verdant Cavern on Melemele Island in Pokémon Moon.* It summons Rattata to help it confront those who take on the trial.

*Gumshoos appears as the Totem Pokémon in Verdant Cavern in Pokémon Sun.

In Pokémon Sun and Moon, you will get to encouter mysterious beings known as Ultra Beasts. Those creatures are extremely powerful, so powerful in fact they may pose a threat to both humans and Pokémon. The Aether Foundation is conduction research on those Ultra Beasts, which are only known by their code name. Those don’t look like Pokémon, and it doesn’t look like you can catch them.

UB-01’s body is composed of a glass-like substance. However, it’s constantly changing shapes, never settling on one.

While evidence of something like a survival instinct can be observed in UB-01, no one knows whether it has a will of its own or any emotions. It’s said that, for some reason, its movements resemble those of a young girl.

At the very center of the Alolan region, there’s a mysterious artificial island. Its name is the Aether Paradise, and that’s where the Aether Foundation is located. That foundation has two goals:

Naturally, you will get to visit the Aether Paradise during the adventure, and you will meet the following characters:

Here’s some artworks for those characters:

Remember Dexio and Sina, from Pokémon X and Y (they were the professor’s assistants). Well, it turns out they’re back in Pokémon Sun and Moon! The pair will give you an item called the Zygarde Cube, that you have to use to collect Zygarde Cores and Zygarde Cells (which can be found all over the Alola region).

It’s pretty easy to spot those Zygarde Cores and Zygarde Cells: they give off an unmistakable light. If you find enough Cores and Cells, it looks like you will be able to meet Zygarde.

Today, a new member of Team Skull was revealed: Gladion. He’s one of Team Skull’s enforcers. For him, there’s nothing more important than being strong in Pokémon battles. His partner Pokémon is Type: null (see above for details about it!).

Just like in other Pokémon games, some Pokémon can only be found in each version of Pokémon Sun and Moon. For example: Solgaleo (Sun) and Lunala (Moon), the two legendaries. Also, the Totem Pokémon, for the trials, are also different: Gumshoos in Pokémon Sun, and Alolan Raticate in Pokémon Moon.

But that’s not the only differences between the versions! It turns out that the way time is set in the two games also differs. It’s explained that, without the exception of some key scenes, the time is tied to the actual game in the real world. But in Pokémon Moon, that time is shifted by 12 hours. Therefore, it’s nightime when it’s supposed to be daytime, and vice-versa.

As mentioned previously, the Rotom Pokédex is much more than just a Pokédex. We got another proof of that today, with a new feature called Poké Finder (which uses the Rotom Pokédex). It’s basically a Pokémon Snap Lite: it allows you to take pictures of Pokémon you find in the wild, at specific spots.

Your pictures are then evaluated, and it looks like other players can give you thumbs ups. The better your pictures, the more features you unlock (including zooming).

Finally, here’s some comments from Shigeo Ohmori, Director of Pokémon Sun and Moon:

We live on a planet overflowing with life. This earth of ours revolves around the sun, and in turn, the moon revolves around the earth. When you look at the sun and the moon from Earth, they appear to be traveling through the sky in similar orbits, but when you change your perspective, you come to realize that their orbits are completely different. Yet the Earth and the sun and moon are all tied to one another, and life grows and flourishes as they work their influence upon one another.

Humans also interact with people of all different kinds. They influence one another, and in turn, are influenced by others. It is only through this miraculous balance that we can live here as we do.

In these titles, what I wanted to express is the brilliance of life and of the relationships between humans and Pokémon as they influence one another. That is why I chose to name them after the sun and moon, which have so much influence over our own Earth.

Between Pokémon Sun and Pokémon Moon, there is a time difference of 12 hours. This was our first attempt at making such a great difference between two game versions. In the Alola region, the Pokémon that you might encounter on the same route can vary between day and night, and so this time difference allows players to have a completely different experience.

And it doesn’t stop at Pokémon—some events are also different from one version to the other, so I hope you all can enjoy both worlds to the fullest.

To show the Alola region’s rich nature and beautiful towns, we were very particular about the lighting. Thanks to that, the same location can have a completely different appearance depending on the time—sometimes wrapped in the gentle glow of moonlight, sometimes illuminated by the crimson of the sun setting over the sea.

At times, the same event will feature different natural phenomena in the two versions, which can only be seen in either Pokémon Sun or Pokémon Moon, so I hope it will be fun for players to compare the two and find these differences.

We’ve poured ourselves into our work so that you can feel an atmosphere and sense of closeness that makes it seem as though you are in the Alola region yourself.