Last week, The Pokémon Company revealed some brand new details for Pokémon Sun and Moon. But as always, we barely have time to catch our breath (especially not with the CoroCoro leaks) that there’s already some new trailer to discover! This time around, we get to see some new Pokémon, some new Alola variants, and some new characters.

Here’s the latest trailers for Pokémon Sun and Moon:

Today, The Pokémon Company revealed some new Pokémon for Pokémon Sun and Moon, with quite a few evolutions: 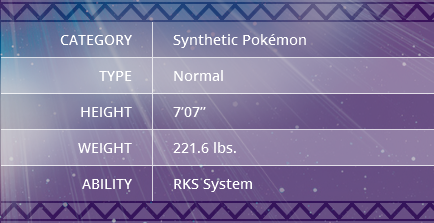 When Type: Null gains a partner it can trust, it deliberately destroys the restraining device it wears. Once released from that heavy mask, the Pokémon’s speed increases substantially. Freed of the restraining effects of its mask, Silvally’s senses are heightened, and it reverts to its natural temperament. It has a wild nature, but it will obey a Trainer that it trusts. And to protect that Trainer from danger, it will put its own life on the line. Silvally is said to have been created to oppose a threat…

By inserting exclusive items into the drive on Silvally’s head, its RKS System can be activated, causing Silvally’s somatic cells to mutate and glow. The RKS System enables it to change its type, and its cells glow with different colors of light, depending on its type.

Silvally’s Ability is called the RKS System Ability, which no previous Pokémon has ever had. By having Silvally hold items that correspond to each Pokémon type, it can change its own type. Multi-Attack is a move that only Silvally can learn, and this move’s type changes based on which type-related item Silvally is holding. 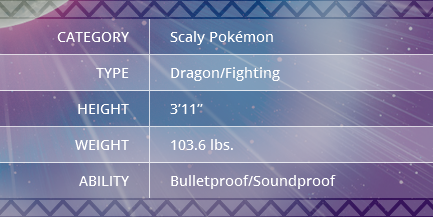 When a Jangmo-o evolves into Hakamo-o, it breaks from its fellows and begins to live on its own to train itself. Wherever it can find Pokémon to battle against, it seems to appear.

Hakamo-o dances before battle to show its strength, clanging its scales together to make them ring out. When this dance reaches its climax, Hakamo-o bellows a fierce war cry to challenge its opponent.

Its scales make for fine armor, so Hakamo-o doesn’t worry about self-defense as it makes multitudes of strikes and overwhelms its opponents. But, as a result, its scales often become damaged and get torn off. They grow back immediately, so this does not cause Hakamo-o undue concern. In fact, it views the number of lost scales as proof of how ferociously it has fought, and it brandishes its bared arms in a boast of victory. 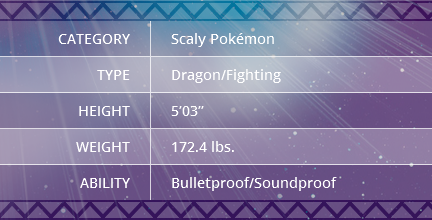 At the end of its harsh training, Hakamo-o evolves into this overwhelmingly powerful form. It returns to the land of its birth, where it watches over the Jangmo-o from a distance.

There is a legend that says Kommo-o is covered in glittering scales in order to drive away a great darkness covering the world. The reason these Pokémon seek out battle is to gain the power needed to defeat this darkness. When it detects someone approaching, this Pokémon rings the scales on its tail to announce its presence. It has no desire to battle against weak Pokémon.

Kommo-o’s greatest move is the uppercut. It swings its arm up from below in a punch of great skill and force, sending its foe flying into the sky. By raising its arms aloft, it can generate a force powerful enough to change the face of the surrounding landscape!

Clanging Scales is a move that only Kommo-o can learn. It scrapes the scales covering its body against one another, attacking with a great clamor. After using this move, Kommo-o’s Defense is lowered. 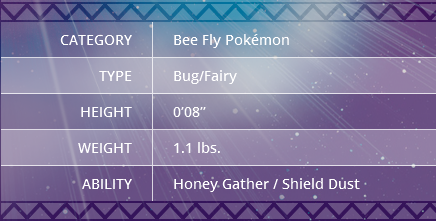 Ribombee collect flower nectar and pollen to make into balls known as Pollen Puffs. These serve as food, and what’s more, they also can cause effects like paralysis or dizziness. Ribombee may use puffs to strike their opponents during battles. Some of the Pollen Puffs that Ribombee make also have relaxing effects or can relieve tiredness. These are distributed around the Alola region as high-priced supplements.

Ribombee hate getting rained on. They’re covered with fluffy hairs that hold the pollen they’ve gathered, and the rain makes them wet and dirty. Alolan people know that if Ribombee are busily visiting the fields of flowers, you can be sure that the fair weather will continue. 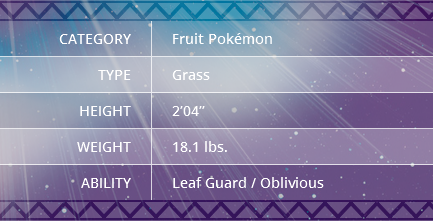 The calyx on Steenee’s head is harder than Bounsweet’s, so Steenee no longer worries about being stabbed by other Pokémon. As Bounsweet, this Pokémon may have preferred to run away from others, but now Steenee and other Pokémon can play together.

Upon evolving, this Pokémon’s fragrance becomes even more delectable, but it also gains a tomboy-like personality. Living together with one is quite the ordeal. As it moves around, it spins its calyx, striking nearby objects, but Steenee couldn’t care less. 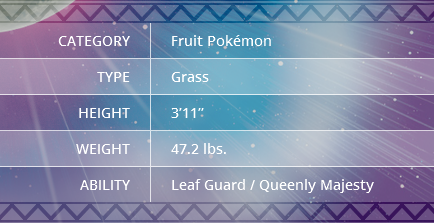 Tsareena has the nature of high-class nobility. Any Pokémon or human that approaches it with evil in mind will be punished forthwith. It even turns its fearsome glare upon its own Trainer if the two of them are not fully in sync, or if its Trainer orders it to use a move that will be ineffective. Only the strongest of Steenee are able to evolve. When this happens, the Steenee evolves with the blessing of other Steenee. It then uses its strength to protect the Bounsweet.

Tsareena is a high-kicking virtuoso. It has honed these skills beyond the level it achieved as a Steenee, and it attacks with graceful movements. At the same time, its fragrance mesmerizes its opponents, dealing them a secondary attack. Trop Kick is a move that only Tsareena can learn. It lowers an opponent’s Attack by showering it with blazing hot kicks in a style similar to that originating from tropical countries. It’s said that this Pokémon loses its strength if touched on the crown-like protuberance on its head.

Some Tsareena have the Queenly Majesty Ability, which no other Pokémon has previously had. The effects of Queenly Majesty are so intimidating that it prevents opponents from using priority moves.

Here’s some artworks for those Pokémon:

Along with the new Pokémon, some new Alolan variants were also revealed: 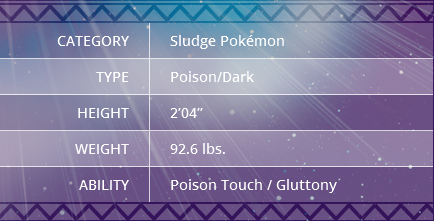 When the population of the Alola region increased, dealing with their garbage became a serious problem. As a solution, Grimer were imported from other regions. They fed primarily on garbage, so their body composition changed—as did their form. What appear to be teeth in this Pokémon’s mouth are in fact residual toxins from the garbage it eats, which have hardened and crystallized. No method has been discovered to break down these crystals. Direct contact with them presents a danger.

Alolan Grimer is always eating garbage, but its constant hunger will cause it to begin eating other manufactured objects if it runs out of garbage to feed on. There are more than a hundred Alolan Grimer in Alola’s garbage-processing plants, and all of the garbage produced in the Alola region is taken for use as their food. 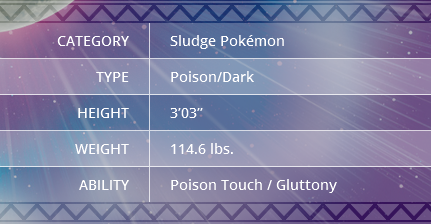 Alolan Muk eats whatever is in reach without pausing, and if it feels the sharp pangs of hunger, it runs amuck. It’s thought that its voracious appetite stems from an inability to maintain its energy levels without a constant influx of toxins. Toxins have accumulated in Alolan Muk’s body from its steady diet of various waste products and manufactured materials. This accumulation has brought about a chemical change, producing a new kind of toxin.

Alolan Muk has the same poisonous crystals as Alolan Grimer, but they’re not limited to its mouth—they extend from all over the surface of its body. Alolan Muk uses them to attack, just like other Pokémon use their fangs or claws. And these highly toxic crystals are easily knocked loose, making them extraordinarily dangerous!

Along with the new Pokémon and Alolan variants, new characters were also revealed today. This time around, we have: