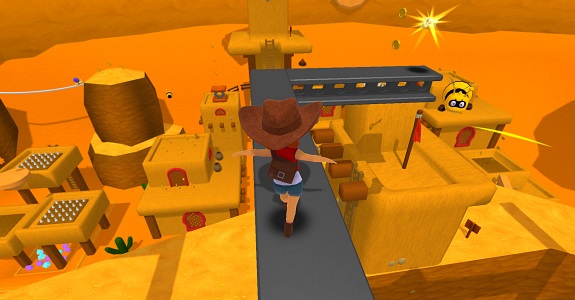 Update: Alliance Digital Media has announced that Poi would be released on October 23rd in North America, where it will indeed get a physical release. The game will cost $29.99 (instead of the $39.99 placeholder price originally listed by BestBuy).

On October 27th, Nintendo Switch owners will be able to enjoy the best of the best when it comes to 3D platforming, with Super Mario Odyssey. And for those who aren’t satisfied with just one game, there’s nothing to worry about: Yooka-Laylee is also coming, just like Poi (to be called Poi: Explorer Edition on Nintendo Switch).

For those of you who never heard of Poi (already available on PC and other consoles), it’s a 3D platformers starring two kids on a grand adventure to unravel the mysteries of the Milky Way Globe.

Your goal in this game is to become a Master Explorer, and to do so, you will need to explore uncharted lands, meet various quirky characters, and defeat comical creatures and bosses. Don’t forget to compete in challenge levels along the way, too! Make sure you learn to pull off wall jumps, triple jumps, rolling long jumps, and more, if you want to succeed…

In this game, there’s no less than over 100 Explorer Medallions to find and collect. And for those who like competition, there’s also global online leaderboards, so you can compete with friend and others players, to see who can clear the various level faster than anyone else.

And if you’re wondering whether the Nintendo Switch version of Poi has exclusive features and content, the answer is… yes! Here’s everything that can only be found in this version of the game:

Unfortunately, it’s not clear what “Joy-Con motion control” refers to, but no doubt the developers will share more details once they’re ready to talk about the game themselves (this comes from a retailer listing, after all).

The interesting bit about Poi is that it’s getting a retail release, at least in North America. According to a listing on EB Games Canada, Poi: Explorer Edition will be released sometime in September, and will cost $39.99.

Here’s the boxart, as well as some screenshots and a trailer (not from the Nintendo Switch version):

Poi (Switch) does not have a release date yet, but it’s already been added to the Upcoming Games page!

Thanks EndlessFloydian for the heads up!