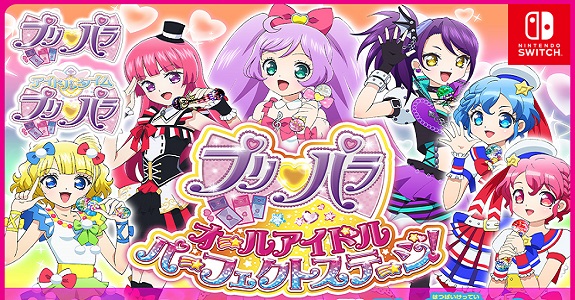 PriPara is a popular idol series, and after several entries on Nintendo 3DS (4 to be precise), it’s now headed to the Nintendo Switch. Today, Takara-Tomy announced PriPara All Idol Perfect Stage, to be released on March 22nd in Japan (price: 5 980 Yen + taxes). It’s a Fashion and Rhythm game, playable in Single Player (you can create up to 6 characters). And… that’s pretty much all we know about the game for now.

PriPara All Idol Perfect Stage (Switch) comes out on March 22nd in Japan. The Upcoming Games page has been updated!

Birthdays the Beginning is the latest game from Yasuhiro Wada, creator of the Harvest Moon series. This game lets you create your own worlds, and then watch the miracle of life unfold. If you’ve never heard of this game, make sure to go check out the official website for further details, pictures, and videos!

The reason we’re talking about it is because Famitsu magazine reveals that the game is headed to the Nintendo Switch, as Happy Birthdays. But it’s not just the title that changed: this version will offer various improvements, as well as some new content and features. Development is said to be 80% complete, which means a 2018 release is basically guaranteed.

The latest issue of Famitsu magazine comes out on Thursday in Japan (Wednesday morning/afternoon in North America and Europe respectively).

Happy Birthdays (Switch) does not have a release date yet, but it’s been added to the Upcoming Games page!