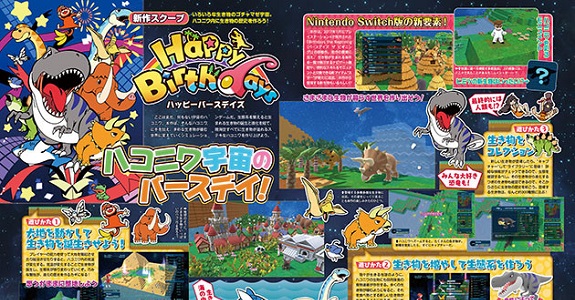 First of all: the release date! Happy Birthdays will be released on March 29th in Japan, and will cost 5 370 Yen + taxes.

This version will offer various improvements, allowing for a more comfortable gameplay experience. There’s also a new item: Stars, that can be traded for useful items and skills. But that’s not all: there’s also some brand new organisms for players to discover, bringing the total to over 300.

The main premise remains unchanged: players get to create their very own worlds, and then they can influence it in order to have various organisms come to life. One of the things you can do is change the temperature of the world, which directly influences the ecosystem and the kind of organisms that come to life. You can collect the various organisms, and add them to your encyclopedia.

So far, Happy Birthdays has only been announced for Japan, but it’s pretty likely there will be a European and North American release (there was one for the original version).

Happy Birthdays (Switch) comes out on March 29th in Japan. The Upcoming Games page has been updated!