Here’s the latest trailer and a commercial for Yoshi’s Crafted World:

And here’s several video clips, showcasing some of the different types of Shu Guys you can encounter in the game:

Here’s the latest episode of Nintendo Minute, which is about Captain Toad: Treasure Tracker (and more precisely co-op and the Special Episode DLC):

Hi! Today we’re going back to the wonderful world of Captain Toad and playing levels in the Special Episode DLC. We’re also playing in co-op mode with one of us as Captain Toad and the other as Toadette. A free update is out now so you can play the entire game in co-op mode! It’s very fun, with the right partner… As always, thank you so much for watching and we’ll see you next week!

Today is the 1st Anniversary of Kirby Star Allies, the latest mainline entry in the Kirby series, which was released exactly one year ago worldwide. To celebrate, HAL Laboratory share a cute illustration of Kirby: 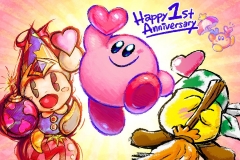