If you live in Japan, or if you have a Japanese Nintendo DSi (XL), Nintendo has detailed the unused Nintendo Points refund procedure: click here for more details!

The official English FAQ is now available: click here to check it out!

Some important details about the Nintendo DSi Shop discontinuation: 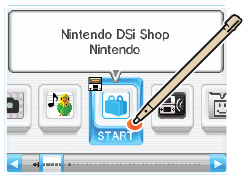 Today, the web eShop for the Wii U and the Nintendo 3DS will go live in Europe and North America. And on the same day, Nintendo announced that the Nintendo DSi Shop would be shut down next year. Nintendo plans to end all services related to the DSi shop in two phases: one in September 2016, and a second one in March 2017.

However, that only applies to DSiWare titles that are currently available on the Nintendo eShop. Those which are not will be lost forever, such as:

It looks like Nintendo will have a refund program for unused Nintendo DSi Points cards, but the company explained that more details about that would be announced at a later date. Right now, we don’t know whether a similar program will be available in Europe and North America or not.