Today, Nintendo had a pretty surprising announcement to make, that doesn’t even involve any of its current platforms. Indeed, what Nintendo announced is the Nintendo Classic Mini: NES (or Nintendo Classic Mini: Nintendo Entertainment System is you want the full name!), which will be released on November 11th in Europe and North America (November 12th in France). It will cost $59.99.

The Nintendo Classic Mini: NES is a near-identical, mini replica of Nintendo’s original home console. You plug it directly to your TV via HDMI, and you can play the following 30 built-in classics: 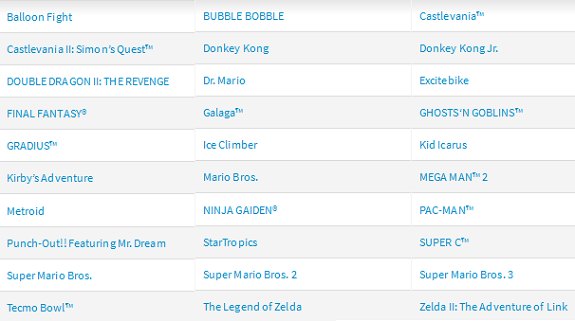 Each game has multiple suspend points, allowing you to stop playing whenever you want.

Here’s some pictures of the Nintendo Classic Mini: NES console:

Since the console itself is called “Nintendo Classic Mini”, this most likely means Nintendo is planning to launch similar devices for other consoles (GameBoy, SNES, Nintendo 64?). Obviously, we will have to wait a little while before getting any sort of announcement!

And in case you’re wondering: the Nintendo Classic Mini: NES will not go online (so no extra games to be downloaded, no Miiverse, no online features). Also, games will not be added to your Nintendo Account / Nintendo Network ID either. This is truly a plug-and-play console!