At the end of the Nintendo 3DS Direct presentation, in Japan, Nintendo made two surprising announcements. The first one is for the Momotaro Dentetsu series, which is getting its first original entry since 2010 with Momotaro Dentetsu 2017: Tachiagare Nippon!!.

For those who never heard of the Momotaro Dentetsu series before, here’s how Wikipedia describes it:

Momotaro Dentetsu (桃太郎電鉄 Momotarō Dentetsu?, Momotarō Electric Railway) (also known by the abbreviated name Momotetsu) is a long-running board game-style video game series in Japan; in which players travel by rail, ship, and airplane; attempting to acquire wealth through business transactions buying properties; and dealing with rival entrepreneurs and nemeses such as the God of Poverty (貧乏神 Binbōgami?). The game mechanics are often compared to the board games sugoroku and Monopoly.

During the presentation, Mr. Morimoto read a letter from Akira Sakuma (creator of the series), who explained that in the past few years, he received lots of messages from fans (via Twitter, mail, etc.) asking him why there wasn’t a new Momotaro Dentetsu game.

He even mentioned the TV show where the game was played on air, which led to a significant increase in sales for the Nintendo Selects edition of the last entry on Wii, a few months ago (it’s not very often that a 5 year+ old game on a retired platform ends up making it to the Famitsu Top 30 out of the blue!). Naturally, this led to even more requests for a new Momotaro Dentetsu game.

In his letter, Akira Sakuma also explained the subtitle of the game: Tachiagare Nippon!!. It could be translated as “Stand up, Japan!!”. This is in reference to the Touhoku and Kumamoto earthquakes, and could be seen as his contribution to the relief effort.

Momotaro Dentetsu 2017: Tachiagare Nippon!! will get brand new illustrations, which were made more modern: 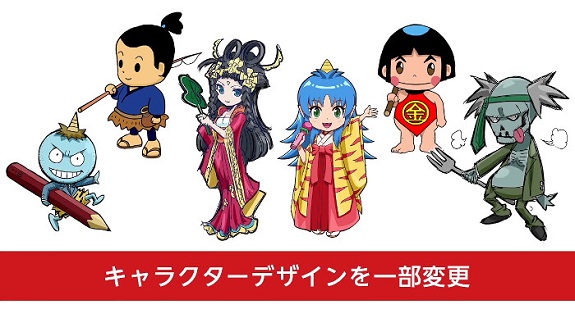 It looks like Momotaro Dentetsu 2017: Tachiagare Nippon!! is going to (one of) the biggest entry in the series, with even more properties to purchase, more historical figures to meet, etc.

Here’s the segment from Thursday’s Nintendo 3DS Direct presentation, with some gameplay footage:

In an article published in 2015, Nikkei explained that Akira Sakuma (Creator of the series) and Konami both shared the licence, after Konami took over Hudson Soft. Unfortunately, they failed to reach an agreement over how to share revenue, and so it looked like it was the end for the series.

But it wasn’t truly the end of the story, as Akira Sakuma apparently began negotiating with Nintendo on development and marketing of a new game, which would be released in 2016. And it looks like Nikkei’s report was spot-on, and that Momotaro Dentetsu 2017: Tachiagare Nippon!! is that very game. It’s not clear what is Konami’s role in all this, as they were not mentioned at all during the Nintendo 3DS Direct presentation.

Momotaro Dentetsu 2017: Tachiagare Nippon!! (3DS) will be released this Winter in Japan.