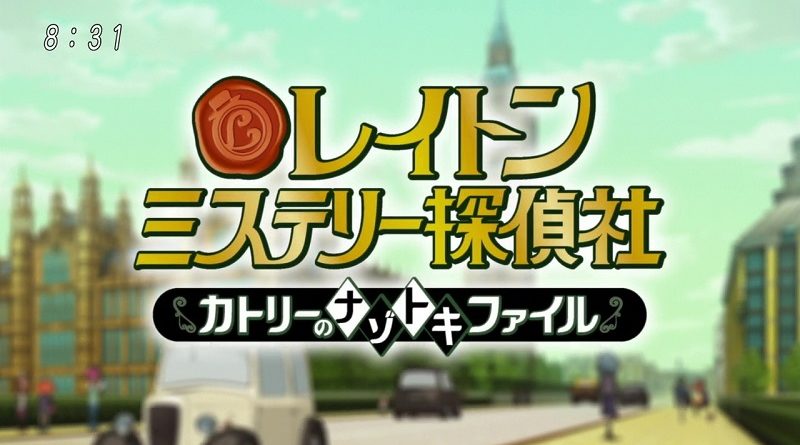 Last week, on March 31st, the 50th and final episode of the Layton’s Mystery Detective Agency (Professor Layton and the Hidden Relics: Final Episode) aired in Japan. It brought an end to the Hidden Relics story-arc (that explained the mystery behind Professor Layton’s disappearance, as well as Katrielle’s origins), but also to the anime series. And it looks like there were also a couple of surprises in it.

The first one is great news for western fans who want to watch the anime series legally. Unlike the vast majority of anime nowadays, the Layton’s Mystery Detective Agency anime series was not simulcasted on streaming services like Crunchyroll. But it looks like the series is coming to Netflix later down the line.

Indeed, the famous streaming service popped up in the list of sponsors for the final episode (it was not listed in any of the 49 other episodes):

This basically confirms the anime series is indeed coming to Netflix, as there’s otherwise no reason for them to sponsor it at all (even if it was just the final episode). Unfortunately, no announcement has been made so far, but chances are we don’t have much longer to wait before getting one.

This piece of news is quite interesting, because the Nintendo Switch version of Layton’s Mystery Journey was recently rated in Australia, confirming that a European and North American release was in the works.

It was surprising that it was taking Level-5 so long to bring the game to Europe and North America (since it was already localised on Nintendo 3DS), but it looks like the company had plans to also bring the anime series, which would explain the delay. It’s pretty safe to assume Level-5 is planning to go with a game + anime combo, and both the anime series coming to Netflix and the game headed to Europe and North America will be announced at the same time. The only question that remains is: when?

But that’s not all: there was another surprise in the final episode. Indeed, during the very last scene, it’s none other than Alfendi Layton and Lucy Baker, from Layton Brothers (a mobile spin-off), that make an appearance!

By the way, this was not the only cameo/reference in the anime series. There was actually quite a few of them:

But unlike the other character cameos, Alfendi Layton and Lucy Baker do not simply appear in the background: the “camera” clearly focuses on them, meaning it’s more than just a mere cameo for fans.

It’s more likely a tease, but for what? A new anime series focusing on the duo? A port/remake/new game of Layton Brothers for the Nintendo Switch and/or other platform(s)? It could very well be both, given how fond Level-5 are of cross-media projects (game + anime/manga/toys/etc.). Several years ago, Level-5 revealed that a new Layton game was in the works, could this be related to Layton Brothers?

All we know for now is that between the Layton’s Mystery Detective Agency anime series seemingly coming to Netflix, the western release of Layton’s Mystery Journey: Katrielle and the Millionaire’s Conspiracy on Nintendo Switch, and a Layton Brothers-related tease, the next few months are going to be quite exciting for fans of the Layton series!