Since this game can be bought using a Nintendo Switch Game Voucher, it’s expected to have a significant amount of digital sales. Unfortunately, we will have to wait until January (with the latest financial results from Nintendo) to get an idea of how much Pokémon Sword and Shield sold on the Nintendo eShop.

But that’s not all: Pokémon Sword and Shield is also the best-selling Nintendo Switch game at launch, as it even managed to outsell Super Smash Bros. Ultimate (1 238 358 units at launch). With strong holiday sales, and steady sales throughout 2020, it should have no trouble selling over 4 million units LTD (especially if you add digital sales).

Unfortunately, Pokémon Sword and Shield is far from being the best-selling Pokémon game at launch, as you can see below (do keep in mind that digital sales are missing): 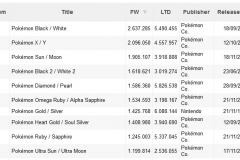 Unsurprisingly, the release of Pokémon Sword and Shield had a noticeable impact on Nintendo Switch sales: the console sold over 180 000 units last week. In comparison, sales were also at 180 000 units last year during the same week, but that was with two bundles on the same day (Pokémon: Let’s Go, Pikachu! / Let’s Go, Eevee! and Super Smash Bros. Ultimate). This year did not have a bundle, just a special Nintendo Switch Lite model released two weeks prior.

It’s certainly quite encouraging that the Nintendo Switch was able to hold its own in 2019, and it bodes well for the upcoming holiday season (though the lack of major game like Super Smash Bros. Ultimate is definitely going to be a handicap).

As expected, the Nintendo Switch Lite outsold the OG model last week, and it’s expected to keep doing it throughout the holiday season. Even if it doesn’t, sales should be much closer than they were in October at the very least. The Lite model is certainly fulfilling its mission of sustaining sales pretty well: last week, they would have undoubtedly been down Year on Year with just the OG model available.

Finally, Famitsu points out that the Nintendo Switch has now sold over 10 million units in Japan alone (including the Lite model, of course). That’s a pretty significant milestone, and one that would have been reached last week even without Pokémon Sword and Shield. There’s little doubt it will reach the 11 million units milestone before the end of the year, and the question is now how close sales will get to the 12 million units milestone by December 31st. 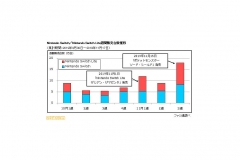