During the usual meeting with investors, which always follows the presentation of the latest financial results, Nintendo talked about Wii U sales, but also amiibo sales, digital sales, and Nintendo Classic Mini: Nintendo Entertainment System sales.

Let’s start with the Wii U, and the following slide: 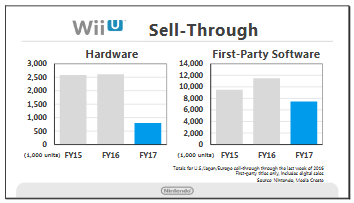 As announced previously, Nintendo planned to ship only 800 000 units before the end of the year, and it looks like their estimations were spot on. Hardware sales dropped like a rock, as seen in the slide above. The drop was much softer for Software, due to less games being released, but it doesn’t mean much. In both cases, sales were well within Nintendo’s expectations.

As for amiibo, the following graph was shown: 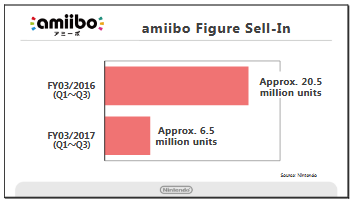 Next, here’s a graph for digital sales: 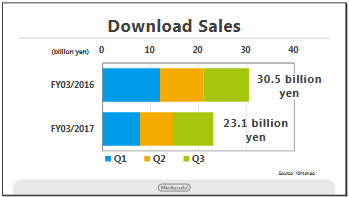 As you can see, sales dropped sharply during the current Fiscal Year. This is primarily due to Nintendo’s DLC offering, which was nowhere near as meaty as during the past Fiscal Year (which had all the stages, characters and costumes for Super Smash Bros. for Wii U and Nintendo 3DS, along with the additional cups for Mario Kart 8, and the DLC packs for Hyrule Warriors).

Finally, Nintendo mention the Nintendo Classic Mini: Nintendo Entertainment System, and explain that they shipped literally every single unit they had prepared for each market. Unfortunately, this was nowhere near enough to avoid shortages, which are still lasting to this very day. Nintendo is currently working to increase production, but it looks like some parts take time to procure…

With 1.5 million units sold worldwide, the Nintendo Classic Mini: Nintendo Entertainment System is a massive success… now, if only Nintendo had been able to keep up with demand, they would have been able to sell many more units (maybe even 3 million units before the end of the year).

For Nintendo, the Nintendo Classic Mini: Nintendo Entertainment System is an opportunity for the company to draw consumers’ attention to the Nintendo Switch. Let’s just hope that the latter will not be as hard to find in stores!