Earlier today, Akihiro Hino shared a third blog post for Inazuma Eleven Ares on the official Level-5 Blog. This time around, he shared a few more details about something he previously discussed in the first blog post, the “confrontation mode”, and its interface.

Back then, he explained that they were thinking of a new system to improve gameplay during matches. Since then, they’ve made various adjustments, and they have reached the point where they can actually incorporate the new system in the game (though they’re still in the process of adjusting the whole thing).

As mentioned previously, this new system doesn’t have you simply choose left or right, you now get to choose the course based on the current situation.

Here’s the various elements of that new system: 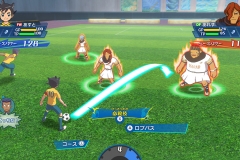 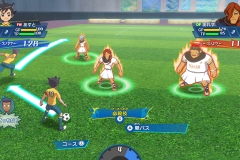 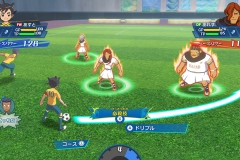 Of course, if you can use a Hissatsu Technique, you can always use it to break through the defenses.

With this new system, you can easily decide which course to take based on the position of the opponents and their aura. It’s still a fair bit more complex than your usual battle commands from RPGs, but thanks to the arrows on the screen, and clear visual cues (the players’ auras), you can get a strategy layer to confrontations without complex inputs.

Akihiro Hino then shared a screenshot of the status screen: 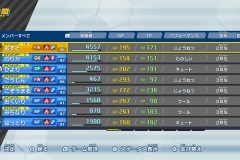 Alongside the screen with detailed info about each player, this screen allows you to quickly check out the GP and TP of each player in a handy list. Akihiro Hino explains that they’re doing their best to make sure to interface and gameplay systems are easy to use.