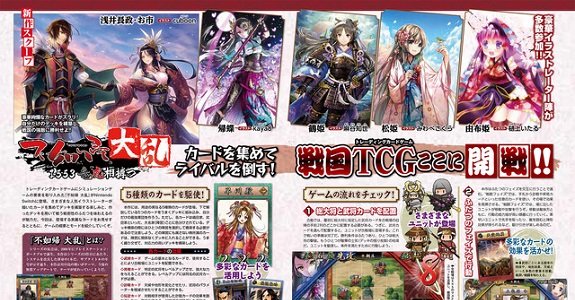 This week, the latest issue of Famitsu has at least one new game announcement for the Nintendo Switch, and it’s Hototogisu Tairan 1553 Ryuuko Aiutsu. It’s the latest entry in the Hototogisu Tairan series from Irem, that combine Trading Card Game with Strategy Game elements. It’s being developed by Granzella, and it will be released in Spring 2018 in Japan.

The theme of the game is the Battle of Kawanakajima, though various other themes will be added after launch via Software updates. There are 4 game modes:

The producer for this game is none other than Goro Matsuo, a Magic The Gathering champion from Japan. Development is said to be 70% complete, according to Famitsu.

Hototogisu Tairan 1553 Ryuuko Aiutsu will be featured in the latest issue of Famitsu magazine, which comes out on Thursday in Japan (Wednesday morning/afternon for Europe and North America), where further details about the game will be provided.

In the mean time, here’s the preview scan from Famitsu magazine:

Hototogisu Tairan 1553 Ryuuko Aiutsu (Switch) comes out this Spring in Japan. The Upcoming Games page has been updated!