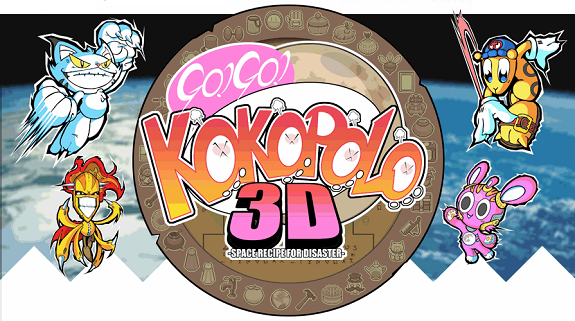 Today, the official website for Go! Go! Kokopolo 3D: Space Recipe for Disaster was opened, providing us with plenty of details and screenshots for this long-awaited sequel. Just like the original, this one is described as a “Chase ’em Up”, and features 80 brand new stages. You get to play as Kokopolo and his insane buddies, who are on quest to find a secret recipe for immortality (that’s what the title is referring to).

Here’s what the story of Go! Go! Kokopolo 3D: Space Recipe for Disaster is all about: Mikosuki, the space rabbit, has been tasked with guarding the secret “Recipe for Immortality” from the inhabitants of the world below, something he has been doing for centuries.

But one day, a meteorite strikes him off-balance, and the stone tablet with the secret recipe is shattered, its pieces falling down to the planet’s surface. 3 characters end up with one of the 3 pieces of the stone tablet, and naturally, they all go on a journey in order to find the other two.

The three characters are:

Gameplay wise, fans of the original will not be disoriented: you scratch enemies with your claws, and then dash away at top-speed. You have to lure enemies through “mind-twisting mazes”, filled with hazards and obstacles. To defeat them, you can feed them to the carnivorous Snap-snap plant.

Finally, here’s some screenshots and art for the game:

Go! Go! Kokopolo 3D: Space Recipe for Disaster (3DS eShop) does not have a release date yet, but it looks like an announcement is coming within the next few days!