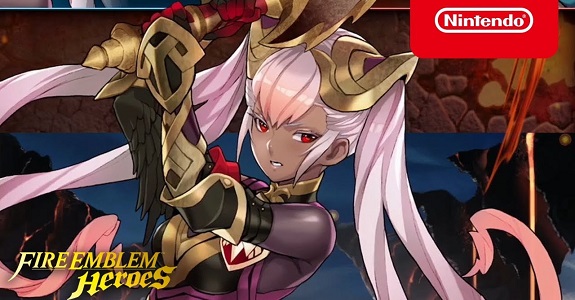 The past few weeks, there has been a brand new Summoning Focus (bringing new Heroes) for Fire Emblem Heroes pretty much every week. And yes, this “Summoning Focus bonanza” isn’t quite over yet, as another one is going live tomorrow (September 21st), and there’s also another one scheduled for next week! The latest Summoning Focus is called Generals of Múspell, and it runs until October 23rd.

As the name implies, this Summoning Focus brings a very special set of Heroes: Múspell’s very own generals, that you got to battle in Book II of the Main Story. It’s the first time story characters are available for Summon!

Here’s the various Heroes included in this Generals of Múspell Summoning Focus:

Here’s the usual trailer introducing the Summoning Focus and its Heroes (English and Japanese versions):

Alongside the Summoning Focus, a new set of Log-in Bonus will go live: it’s called “New Heroes Celebrations”, and will allow players to get a total of 13 Orbs. Unfortunately, it doesn’t look like there’s a new Story Chapter this time, not even an Intermission map…

Make sure to keep an eye out on the Events and Content Updates and Characters pages to keep up to date with all that’s happening in the game!