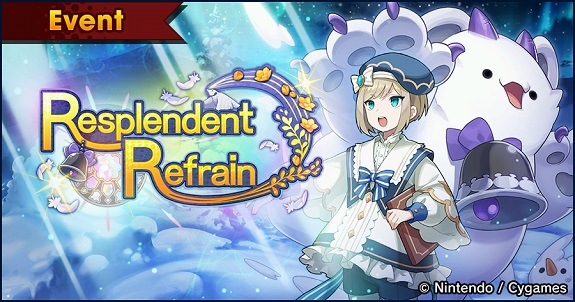 The next event for Dragalia Lost is a Raid Event called Resplendent Refrain. It will take place from November 30th to December 12th, with the period for redeeming rewards running until December 19th.

Do you like songs? If so, you must come see us! I’m Elias of the Harmonia Choir, and we’ll sing many a song for you! But make it fast; I don’t know how much longer my voice will last…

And here’s the main characters/dragons feature in this event:

Called the songstress of the century, her ethereal voice captures the hearts of all who hear it. Her voice has earned her renown across the continent, but rumors whisper that she has an equal talent for the slaying of fiends.

A young boy from the Harmonia Choir. He boasts a heavenly voice, and expects the best from both himself and others when it comes to singing. He likes sweet things a great deal, but fears this makes him seem a bit childish.

A dragon who protects the Harmonia Choir. He has long lived in the town where they are based, where he is beloved by all. He enjoys being fashionable, and wears a bell the choir children gave him around his neck with pride.

Since this is a Raid Event, players will be able to team up in order to take down a giant boss. To be more precise, 4 players can team up, each bringing 4 adventurers each… that’s 16 adventurers at once! The Raid Boss for this event is called Sabnack (which is a Shadow-type boss).

This event will allow you to earn a 5 ★ Dragon, called Maritimus. There’s two ways to get it: via Blazon Summons, or as a event reward (using emblems earned by clearing quests, and taking down the Boss and Raid Boss).

Just like the previous Raid Events, you can also befriend a character: Elias. He appears in the story of the event, and if you earn enough points by clearing quests and taking down the Boss and Raid Boss, he will become your ally permanently!

Finally, you can get a new Wyrmprint as reward: As The Snow Falls (Curse Res +20%, last Recovery II).

Finally, this event also features 3 brand new songs, made exclusively for it: “overture”, “blurry”, and “Kaede”.

Also, a new buff is introduced: Energy. It upgrades certain skills once enough energy levels have been accumulated. Once that level reaches 5, a character becomes “energized”, and their next attack skill or recover skill will get a 50% boost.

Notice 2: an issue occurs when clearing the Beginner and Standard difficultu levels of the Manticore Assault quests. The developers are currently investigating this issue, more details coming soon.

Dragalia Lost: Resplendent Refrain – How to play and Rewards/Summon details

Here’s details about the event:

The streets of a beautiful snowy town are filled with an equally lovely song. Following the music, the prince and his friends find the gifted Elias, a singer in a local choir. But Elia’s days are frought with worry — can anyone shine a light on the darkness in the poor boy’s heart?

This event features a special character: Elias. He’s only available during the event, but by clearing quests and defeating the Boss and Raid Boss, you can increase your friendship level with him. Once it’s maxed out, you will be able to keep using him as an ally even after the event is over (he even comes with her own Adventurer Story)! Naturally, his level, stats, equipment, and position on your party will be maintained if you do unlock him. If you don’t, do keep in mind that any item used to upgrade his level or his Mana Circle, or to promote him, will not be returned.

By beating bosses, you earn otherworld fragments: you can then use those to challenge the mighty Sabnack with your friend during a Raid Battle. During those, all 4 players bring 4 characters each, for a total of 16 characters in battle. There’s 3 difficulty levels: Beginner, Standard, and Expert.  If you’re hosting a room for a raid battle, you will need otherworld fragments and stamina. If you join someone’s room, you only need Getherwings.

There’s also the Blazon Summon: it requires peregrine blazons (obtained by clearing quests, boss battles and raid battles), and it allows you to earn big rewards, including an exclusive  Dragon! You can get a resettable dragon as reward: if you do, you can reset the summon content up to 5 times (after that, you have to accept the rewards).

Here’s the list of Emblems rewards (Bronze, Silver, and Gold):

And here’s the contents of the first Blazing Summon: