In this post, you will find everything there is to know about the Software updates for Fire Emblem Echoes: Shadows of Valentia on the Nintendo 3DS (originally released on April 20th in Japan, and May 20th in Europe and North America).

How to download updates for Fire Emblem Echoes: Shadows of Valentia for the Nintendo 3DS?

To download updates for Fire Emblem Echoes: Shadows of Valentia on Nintendo 3DS, you have three options:

To check that you have the latest version installed, simply launch the game: the right version number is displayed at the bottom right corner of the top screen (in that case, Ver. 1.1): 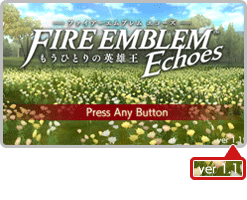 Click here for more Software updates!
A big thanks to norfy for the heads up about the support conversation voices!