A few minutes ago, Famitsu revealed the usual previews for its latest issue (May 21, coming out on Thursday). This week, we get four games on Nintendo platforms:

This week, Puzzle & Dragons Super Mario Bros. Edition gets a 12-page article, including an interview of the developers, some details up to World 3, and even a download code for a special item!

Puzzle & Dragons Super Mario Bros. Edition (3DS) comes out in just a few hours in Japan, on May 8th in Europe and May 22nd in North America. In the west, the game will be included in a bundle with Puzzle & Dragons Z.

This week, Splatoon gets its bi-weekly article in Famitsu magazine, with details about the Battle Dojo, new enemies and new weapons. Of course, the usual drawings from fans will be in there, too! 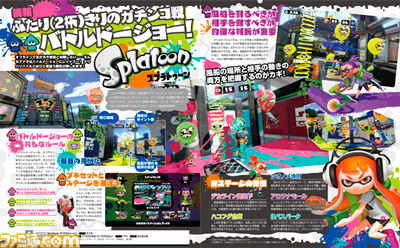 This week, Famitsu has some new information about PoPoLoCrois Bokujo Monogatari, including the Battle system.

Xenoblade Chronicles X (Wii U) comes out in a couple of hours in Japan, and later this year in Europe and North America!