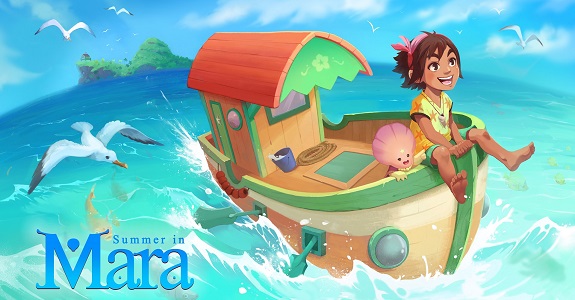 You will be Koa, a little adventurer who wants to explore the world that surrounds her. But she also has to take care of her own island, in the middle of the ocean called Mara. You’ll be able to fish, chop trees with your hatchet, build things with your hammer and harvest your land. Also, you’ll be able to explore the surrounding islands with your boat, meeting a lot of unique characters, each one with their own lifes. They can give you hints, tell you secrets about the world or show you locations for treasures.

Summer in Mara (Switch – eShop) comes out next year. The Upcoming Games page has been updated!

Last week, Fruitbat Factory announced the upcoming release of Neko Navy – Daydream Edition on Nintendo Switch. It will be available from the Nintendo eShop this winter worldwide. As the title implies, it’s an enhanced edition of the original game, featuring rebalanced difficulties (but also a new one: Death Mode), a new gameplay mode (∞ mode, with an infinite number of challenge stages but only one life for the player), and more. It offers the following languages options: English, Japanese, Chinese and Korean.

Shoot, evade, and detonate Bombers! Neko Navy is an exhilarating horizontal-scrolling shooter with easy controls. The game offers three difficulties that everyone from a beginner to an advanced player can enjoy. Fire off as many Bombers as you can to achieve high scores!

Last week, Square-Enix Collective announced the upcoming release of Oh My Godheads: Party Edition on Nintendo Switch. It will be available starting tomorrow (September 25th). It will cost 14.99€ / £11.99 / 14.99€.

Fancy taking on your friends on that rather dodgy looking sofa-bed in your mate’s garage? Done. Want to give your gran a taste of frenzied ‘capture-the-head’ action on her 1970’s settee? You’re all set. Up for a slice of multiplayer madness with complete strangers on the bus, on a plane, in or the waiting room at your never-on-time dentist? Oh My Godheads’ brand new Party Edition on Nintendo Switch™ has you sorted.

For those yet to enjoy Oh My Godheads, the game’s manic multiplayer tasks players with carrying a variety of magical Godheads back to their base, closely mirroring traditional capture-the-flag style gameplay but adding a whole heap of extra delirium thrown in for good measure. As well as defending against each other’s attacks, gamers also have to take on the Godhead itself – a typically unwilling and malevolent memento not especially keen on your advances.

And here’s the list of new features included in the Party Edition:

Oh My Godheads: Party Edition (Switch – eShop) comes out on September 25th in Europe and North America. The Upcoming Games page has been updated!

Last week, VooFoo Studios announced another game for the Nintendo Switch: This Is Pool. It will be released in early 2019 in Europe and North America.

Here’s the teaser trailer and some details:

Prepare yourselves for the return of the masters of the baize as the creators of the critically acclaimed *Hustle Kings and Pure Pool return with This Is Pool®. Developed using all the power of VooFoo Studios’ updated and completely revamped world-class game and physics engine, This Is Pool® will set new benchmarks for graphical fidelity and hyper-realistic gameplay in a breathtaking simulation that is set to redefine how good a cue sports game can look and play.

This Is Pool® will expand and improve on previous games to deliver the most robust, expansive and feature-rich cue sports game to date that will include every major rule-set played worldwide, practice mode, mini-games, career mode, arcade trick shots and ‘scenario’ challenges, rule-set customisation, local and online multiplayer and more, along with the option to play with a top-down camera view.

This Is Pool (Switch – eShop) comes out in Early 2019 in Europe and North America. The Upcoming Games page has been updated!

Last week, Varsav Game Studios announced that the release of Bee Simulator was delayed to Spring 2019… and on only one console (it’s not even guaranteed to be the Nintendo Switch). The reason? The developers decided to expand the game based on the large amount of feedback they received following the reveal, earlier this year.

Here’s the list of things they’re adding to the Bee Simulator:

Bee Simulator (Switch – eShop) does not have a release date yet.