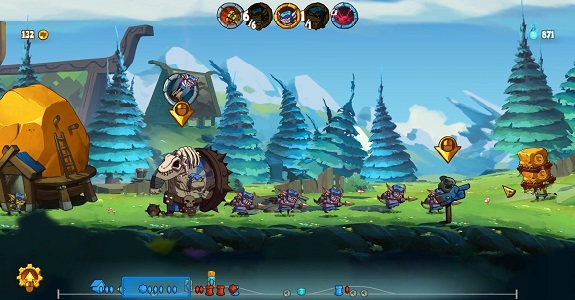 Today’s Nintendo eShop news (Round 2): Trine 4: The Nightmare Prince announced for the Nintendo Switch, but also…

After the tepid reception of Trine 3, it seemed like the Trine series was in limbo. Fortunately, it looks like it’s not the case after all! Frozenbyte has announced that a new game is currently in the works, and that it will be released next year. It’s called Trine 4: The Nightmare Prince, and it’s develpped by in partnership with Modus Games (who is publishing it). Unfortunately, that’s pretty much all we know about the game so far, as the official announcement is coming “soon”.

Trine 4: The Nightmare Prince (Switch – eShop) comes out next year in Europe and North America. The Upcoming Games page has been updated!

Ronimo Games has announced that Swords and Soldiers 2 Shawarmageddon will be released in December on Nintendo Switch. This version of the game will feature split-screen multiplayer.

Here’s a trailer, more details , and some screenshots:

Vikings face off against Persian and Demon armies in ferocious battles across the globe. Push the enemy back and smash their base with a legion of distinct units, spells and structures. If your opponent’s base still stands after all that, break the deadlock with one of the powerful heroes.

A 10 hour single player campaign sees you race against time to stop a tasty but terrifying apocalypse and is further bolstered by plenty of bonus challenges and mini-games. What begins as a simple mission to recover your favorite shawarma snack becomes a battle to prevent Shawarmageddon! Along the way you’ll also collect units, spells and structures, which will allow you to build your own crazy mix by using the custom army feature. Build the army of your dreams – even use units from all three factions at once! Then, once your beard has grown and your swords sharpened, you can test your mettle either in local multiplayer or against other chieftains from around the world in online multiplayer!

Swords and Soldiers 2 Shawarmageddon (Switch – eShop) comes out in December in Europe and North America. The Upcoming Games page has been updated!

Shimmering Lagoon (Switch – eShop) does not have a release date yet.