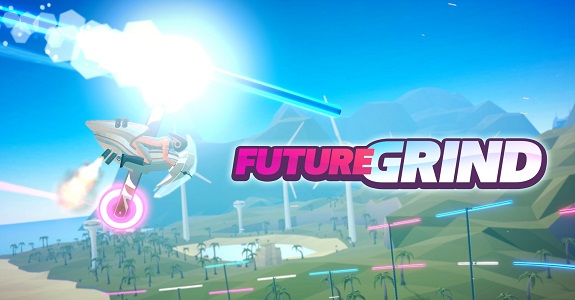 Yesterday, Owen Goss announced that FutureGrind is coming to the Nintendo Switch, though no release date was provided.

Nail the perfect line in the future’s most challenging stunt sport! Grab your bike and hit the rails in this stylish stunt-racer all about tricks, skill, and speed. Use your futuristic motorcycle to do crazy combos on tracks made of floating rails, but be careful: If you touch the wrong rail you’ll explode! Only skilled players will earn endorsements from The Sponsors and make a name for themselves.

FutureGrind (Switch – eShop) does not have a release date yet. The Upcoming Games page has been updated!

Yesterday, Ratalaika Games announced yet another game for the Nintendo Switch: Shadow of Loot Box, a parody first-person shooter that picks jokes at microtransactions (developed by the same team as One More Dungeon). It will be released before the end of the year in Europe and North America, and will be playable in English, Spanish, German, Russian and Japanese.

If you always thought that there were too few loot boxes in other games, this game is for you! Shadow of Loot Box is an attempt to present what video games can become in the near future. Each level of this shooter is a reference to a popular trend in the modern game development industry. Will you be able to overcome the thorny path full of microtransactions, loot boxes and bugs, resisting the temptation to use the in-game store?

Shadow of Loot Box (Switch – eShop) comes out later this year worldwide. The Upcoming Games page has been updated!

The Express Killer / Murder in The Hotel Lisbon

Yesterday, Nerd Monkeys sent a press release to announce that they are bringing 2 games to the Nintendo Switch: The Express Killer and Murder in The Hotel Lisbon. Unfortunately, we will have to wait a bit longer before getting more details!

You can check out the official website for more details in the mean time:

Here’s some screenshots for 3 Count Bout, the latest ACA NeoGeo release for the Nintendo Switch:

Here’s the latest screenshot for Save me Mr Tako:

Here’s one lone character artwork for WILL: A Wonderful World, introducing Spottie the cat!

WILL: A Wonderful World (Switch – eShop) comes out in October in Europe and North America.

Here’s the preview for Black Bird in Famitsu magazine:

Here’s a trailer for the latest weapon added to Fortnite (via the Ver. 6.02 update, now available):

Check out Captain Harris in action! 🐙

Have you bought Achtung! Cthulhu Tactics yet? Check it out on steam here: https://t.co/lZ326Spc73 pic.twitter.com/jJcMMpbv9P

Dash is one of the skills you can unlock in #FeudalAlloy.https://t.co/EGMQWlT1D3https://t.co/oKuWwScNlK#indiegames #gaming #videogames #IndieGameDev pic.twitter.com/MCACW8F8YR