Yesterday, Chucklefish shared some details about what’s coming next to Wargroove. There’s two updates in the works:

The major update also includes some new options for the Map Editors: check out this post for more details about them!

Here’s a video clip showcasing one of the new features: the Gizmos!

Trine 3: The Artifacts of Power

Frozenbyte have announced that Trine 3: The Artifacts of Power will be released on July 29th in Europe and North America. It will cost $19.99.

Trine 3: The Artifacts of Power is a 3D platforming game of action, puzzles and adventure. The heroes try to return their extraordinary gifts to the Artifact called Trine, and so they meddle with powers beyond their understanding: Trine shatters, and a heartless ancient sorcerer escapes. With only a broken artifact to guide them, the heroes must try and repair the damage they’ve caused… or the damage that might yet be done. 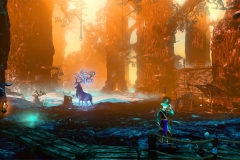 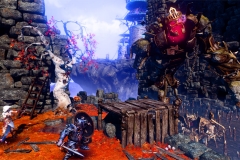 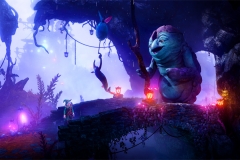 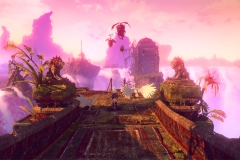 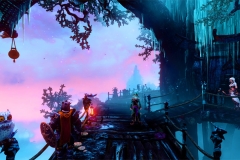 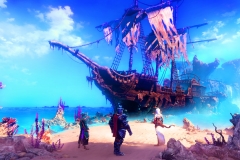 Trine 3: The Artifacts of Power (Switch – eShop) comes out on July 29th in Europe and North America. The Upcoming Games page has been updated!

A black hole has crashed into your home galaxy, leaving you struggling to survive among the floating fragments of countless worlds. Control your robot hero through an infinite series of procedurally-generated levels populated with out-of-control machines, bizarre alien creatures and deadly traps.

Rogue Singularity is a return to the golden age of 3D platforming, rewarding quick thinking and even quicker reflexes as you desperately try to survive one cosmic level after another. Players who grew up with a Nintendo 64 or PlayStation 1 controller in their hands will feel a rush of nostalgia as they jump, dodge and roll across treacherous floating worlds.

Build your own robot and race through jungles, volcanoes and factories as well as stranger places, including giant beehives and floating coral reefs, to a blistering electronic soundtrack from chiptunes legend Derris Kharlan.

Rogue Singularity (Switch – eShop) comes out on August 15th in Europe and North Americac. The Upcoming Games page has been updated!

Blowfish Studios have announced another game for the Nintendo Switch: Infliction, a psychological horror game from Caustic Reality. It will be released this Fall in Europe and North America, and it will cost 17.99€ / £15.99 / $19.99 / AUS$24.99. The following language options will be available: English, French, German, Spanish, Russian, Japanese, and Simplified Chinese.

Wander through an interactive nightmare set within the confines of a once-happy household. Piece together the mystery behind a harrowing series of events while struggling to survive encounters with an entity that relentlessly stands in the way of finding absolution.

Explore a home crystalized by tragedy and uncover the heartbreaking secrets hidden within messages, artwork, household objects, and other vestiges of domestic life. Uncover clues and use items to unlock new paths and make discoveries while doing everything possible to avoid the malevolent presence inhabiting the residence. Hide under tables or beneath beds and harness light sources like camera flashes to stun the spirit and momentarily elude its pursuit.

Infliction couples a story-driven approach to horror with a dynamic atmosphere to produce an unsettling and unpredictable first-person experience that deals in mature subject matter. Imbuing familiar elements of everyday life with the supernatural, developer Caustic Reality delivers a terrifying otherworldly adventure that hits frighteningly close to home.

Infliction (Switch – eShop) comes out this Fall in Europe and North America. The Upcoming Games page has been updated!

Here’s a trailer for the Bad North: Jotunn Edition expansion (which is completely free):

Bad North: Jotunn Edition (Switch – eShop) does not have a release date yet.

Crossniq+ (Switch – eShop) does not have a release date yet.