TOMA Game Studio has announced that Overdriven: Reloaded, an intense shoot ’em up with Bullet Hell and Match 3 gameplay. It will be released on December 31st in Europe, and January 10th in North America.

Overdriven Reloaded is playable up to 4 players in local co-op. In addition to the Story mode, in which the progression is done by finding hidden items,
and to the Arcade mode in which the game is fully playable at once but with only 3 continues, the Manic mode proposes to play with a higher difficulty, without any healthbar, and a higher number of available continues. In order to achieve the 1CC coveted by the fans of the genre.

The Line mode offers to players the possibility to fight an enemies horde, trying to reach a line which go up progressively. If an Enemy join the line or if the line reach the top of the screen, the player lose the game. Each enemy killed will make the line to go down a bit.

More than fifty puzzle maps propose a Match 3 with bullets gameplay. To switch the color of the ship and of its bullets will change the color of a block when firing on it. Align 3 blocks verticaly or horizontaly will make it disapear. If a color is taken by a player, other players can’t take the same color. So , in a cooperative game, players have to be coordinated ! It’s a very entertaining mode to play with friends ! This feature is also present at some places in the Story/Arcade/Manic modes.

Yesterday, a content updat for Cattails was released… on PC. That update will be released in Early 2019 on Nintendo Switch, in late January or Early 2019. You can find more details about it on this page or at the Source link below!

Yesterday, the latest Devblog post for Decay of Logos went live, and it’s all about… trees this time around! Click here to check it out.

Here’s a couple of screenshots, showcasing the old and new tree models (old ones on the right):

Here’s an artwork for Double Cross: 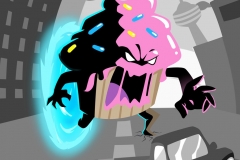